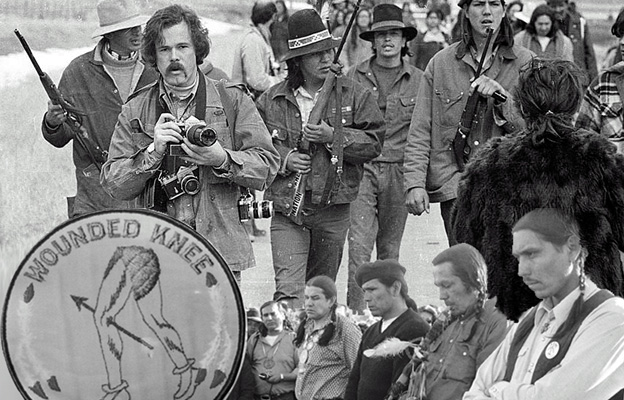 They occupied the town of Wounded Knee in protest against Wilson’s administration during the “Reign of Terror,” as well as against the federal government’s persistent failures to honor its treaties with indigenous nations.

“Wounded Knee happened because Indian people wanted to survive as Indians and there wasn’t any way to survive, so we made a stand and made a statement, but now Indian people are beginning to rebound, rebound according to their [concept of] “Beauty.” And that’s really what’s necessary.to understand: Indian people have to become free again.”

Later, AIM leaders Dennis Banks and Russell Means were indicted on charges related to the events, but their 1974 case was dismissed by the federal court for prosecutorial misconduct, a decision upheld on appeal. 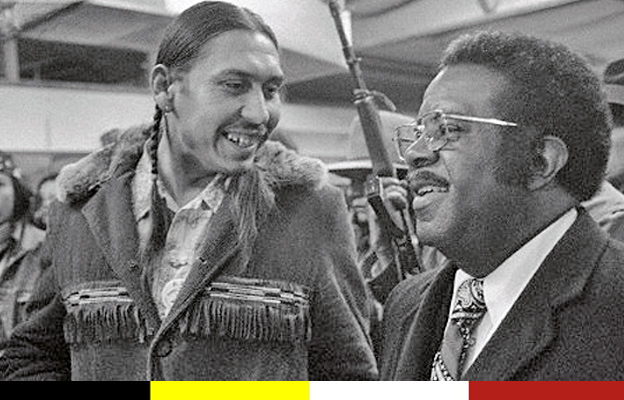 February 27, 1973, the American Indian Movement, having been engaged with para-military forces of the United States for 71 days, reached a cease-fire to the gun battle that left a handful of people shot dead or injured.

Pride and Heartache are two words recently used to describe the legacy of Wounded Knee II today. However, I respectfully describe the effects of Wounded Knee II not as a “legacy” like it is all in the past because the movement is very much alive, not with “pride” as if we are boastful about what we had to do to defend our dignity, and certainly not with “heartache” as our indigenous hemisphere could not be more heart-strengthened by the water-shed even that is Wounded Knee II.

Violent rabble-rousers those AIMsters. The B.I.A. takeover and trashing of the building meant to “help” Indians, the burning down of the courthouse in Custer, South Dakota when they refused to charge a white-man with the murder of an Indian, the 71-day siege at Wounded Knee where 10,000 rounds of gunfire were exchanged and lives were lost. This is the American Indian Movement. 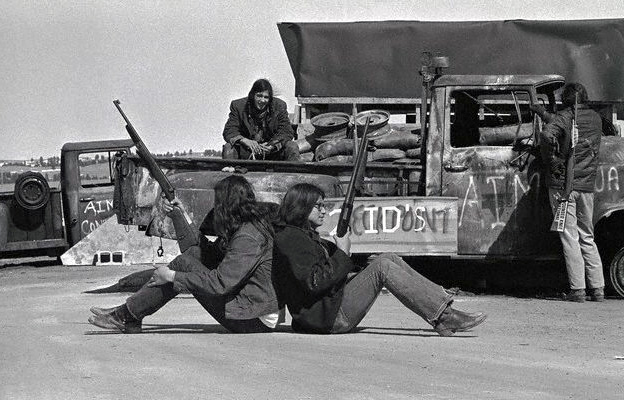 Mainstream has succeeded in repainting the face of AIM so that we associate the word AIM within your face-gun-toting thuggery whose influence we fail to recognize for its contributions then and its evolution now.

I do not dispute that the AIM of the 70s was violent; our people didn’t have the blessings of time and coherent organization to plan each and every step of the movement. Things just happened of their own energy, including violence.

However, any real movement of the people must have more than just a knack for confrontation and violence. Real movements must embrace the strong will of the people to change. Movements provide a vehicle for communities to take control of their destiny.

This is what I wanted AIM to be: a long-lived, evolving resurgence movement that would pervade all aspects of modern indigenous existence in our inter-generational process to reclaim our dignity.

And during the early days of the AIM patrol (to police the white cops dishing out brutality to Indians in Minneapolis) and the good days of tent-city wherein AIMsters cut wood and hauled water for elders, AIM was about practical community control of its own destiny.

Then AIM had to take it to a higher and more controversial level which resulted in a response from COINTELPRO and the subsequent killing and imprisoning of AIM leadership and successful disorientation of the movement.

This time is coming to an end as it is obvious that our people are embracing their Creator-given sense of justice and freedom as indigenous peoples wrongfully and illegitimately subjected to Christian-Corporate-Rule. AIM breathed life into many different forms.

All of our movements are constantly evolving into other forces. It is clear to me that Indigenous peoples should take their place in leading and working with all of humanity. Race is, of course, a human construct as we are surely all indigenous meaning coming from the universe with spiritual covenants to the land and each other.

We are in a state of emergency right now with the Keystone XL pipeline, the petro-backed banking system bound to collapse, drinking water being wasted and poisoned for the benefit of the greedy carbon economy. Uranium mining in our territories, sacred sites facing destruction and so on.

This I believe to be our role as Indigenous peoples: to share our beautiful world with that of the purported colonizer. They came here to feed an insatiable greed for riches and self but I think they were sent to learn how to respect sacred sites, the land, the water, other humans, other world views, other beings, to learn what true civilization looks like.

So let’s honor today and make the most of every day. We are all seeking a spiritual revolution. Hau lila wopila. Ikopasnimani le miyelo.

SOURCE: Based on materials from Wikipedia, article of Last Real Indians by Chase Iron Eyes