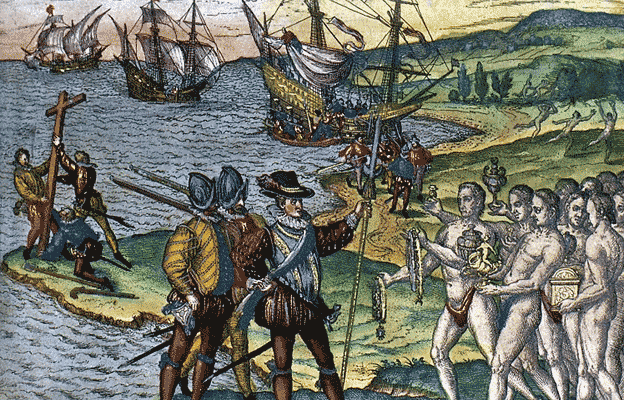 Do you know the true origin and meaning of the word “Indian” as it pertains to American Indians?

Many people have argued that American Indian is not the correct term for our people who are the original inhabitants of the Americas. Many assume that the word Indian comes from Christopher Columbus being lost at sea and him believing he was in India, so he decided to call our people Indians based on that.

What about you, what do you think of the word Indian?

But the true history of the origins of the word Indian has nothing to do with India or its people, but originate with our Indigenous peoples of the Western hemisphere. “Was “India” known by its original peoples as the Indies and or, India prior to 1492?

No. India was not the true name as used by the people of that anomalous name in the 1400s. The Etymology of the term “India”. From Latin India, “region of the Indus River,” later used in that region and beyond, from Indos “Indus River,” from O.Pers.

Hindu, the name for the from Latin India, from Greek, India “region province of Sind, from Skt. Sindhu “river.” The more common form was Ynde or Inde. From Fr. (see Indies). India: the term [Indies], began to prevail circa 16th century, [1501 to 1600], under Spanish or Portuguese influence.

Beyond the reality that the indigenous peoples of, “India”, did not refer to their domains as such, even at the time of the infamous “Columbus”, the name India was not in use until the 16th century.

As seen and stated by its own people, “India”- has been called Bharat even in Satya yuga ( Golden Age ) The name `India’ is derived [by later invading entities] from the River Indus, the valleys around which were the home of the early settlers. The original [Pre-Christian] Aryan celebrants referred to the river Indus as the Sindhu.

Persian invaders converted it into Hindu. The name `Hindustan’ combines Sindhu and Hindu and thus freely infers, the “land of the Hindus”. Thus, at the “time of Columbus “India” was known by the Persian epithet; variously; Hindus & Hindustan”.

“In the Latin language of ecclesiastics and royalty of the time, [the] “People or Children Of God”, as Spaniards often referred to the Indigenous, translates freely as “Los Ninos’ de la Endeo” and consequently, Los Ninos de la Indios” [ more-literally “children of God”]; “En de o” [freely] “of God. No country, land, sea or people in the world were named “India” prior to 1492.

The ‘sub-continent’ of the nation and country known today as “India’, did not become officially so named until the later arriving and permanent British presence in the 1700s. The Eurasian domains of [India] and the various autonomous indigenous domains were prior to and at the time of 1492, known by their various, proper designations as, Hindustan, Turkistan, Kurdistan, Pakistan, Afghanistan, etc.; as designated by their varied original indigenous peoples.

Hence, the question, if the slang referent Indies, and its consequent, Indio, did not surface in popular use among Spanish and Portuguese lingua until the 16th century, how could Columbus possibly spewn forth from his mouth in 1492?

Either “Columbus had knowledge of the future”, or, he didn’t set sail “for the Indies”, until at least the 1500s when the term India and Indies was in use. This proceeding from narratives of, Bartholomé de las Casas, together with additional reports concerning his pleas to the King and Queen of Spain in behalf of the few surviving indigenous of the Caribbean, is likely as close as one is to come to comprehend the origin of the term, Indio and Indian as applied to “American Indian[s]”.

Within one of many trips back to Spain, [from the Americas’], to plead with “King Ferdinand and Queen, Isabella”, for the souls and lives of the Indigenous peoples then, swiftly disappearing under the subjugating sword, disease and slavery of the Spaniards and Portuguese, “las Casas”-summarily informs the “Royal heads of “Castile”-[Spain]; that upon observing the nature and manners of the Indigenous peoples of Guana’hanni’, [the island that “Columbus first visited] that; “their manners are decorous and praiseworthy, they are guileless and honest, with no vices among them, they have no thieves or liars among them and they give freely of all that they have, and when they have no more to give they cry”. [He continues], “they are truly as the children of God”. [i.e. Los Ninos de’la’endeo]

NOTE: En de o/of God & Los Ninos-the children [of] In the Latin tongue of the day, the expression, [children of God] is “freely” translated as [in the feminine form; la’ ninias de la endeo”, and the masculine form; Los Ninos de la Endeo”: children of God; a term later corrupted by the aberrant Spaniard tongue as los nineos de la Indio” then, ultimately reaching contemporary ears as Indio, then, Indianer, and Indian.

Why is this understanding of the aberrant word Indian, hence American Indian, less plausible than a tale concocted by dogmatic Imperial standard-bearers’ to hide the truth?

SOURCE Compiled by Sonya Braxton based on materials from “Illuminating the Historic and Contemporary Path” by David Michael Wolfe and Speech “For America to Live, Europe Must Die” by Russell Means, 1980, Black Hills International Survival Gathering, South Dakota.