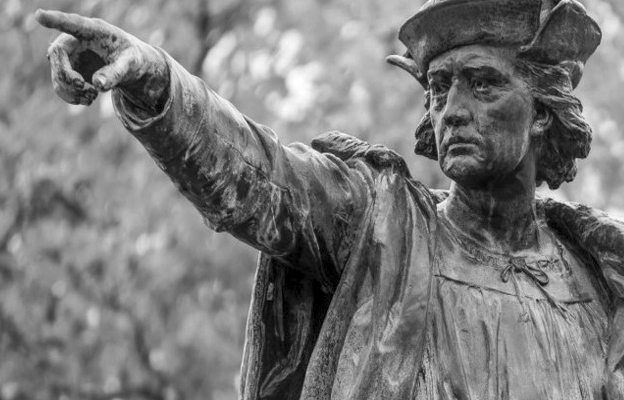 Columbus was a genocidal maniac. Many people are very much against Columbus having his own holiday. They feel Columbus Day should be abolished, and that his true history should be well exposed to the public.

If you don’t know why that is, I highly recommend you thoroughly research the man’s history. Here are a few random facts as well as a few quotes of his…

For starters, did you know, the real reason Columbus was ‘sailing the ocean blue’ was because he raped the 13-year-old daughter of a Spanish Duchess? They couldn’t kill him without angering the Italian court, so Queen Isabella just sent him on a mission they didn’t think he would return from.

It is also ON PUBLIC RECORD that he rewarded his soldiers by giving them Native to rape, and Eat.

Never Forget. At times, they would make an example of a Native by cutting his hands off and tying them around his neck, then telling him to go and ‘share the message’ with the rest of his tribe. Other times they would go and massacre an entire village, unconcerned with the age of their victims. (It’s no wonder the ‘elite’ gave him a holiday..)

When Columbus first came ashore and was greeted by the Arawak Native Americans with smiles, gifts, and food, he wrote in his log:

“They brought us parrots and balls of cotton and spears and many other things … they willingly traded everything they owned … They do not bear arms, and do not know them, for I showed them a sword, they took it by the edge and cut themselves out of ignorance. They have no iron. Their spears are made of cane … They would make fine servants … With fifty men we could subjugate them all and make them do whatever we want.”

Never Forget. From the very outset, Columbus was writing about conquering and enslaving the natives. Meanwhile, the Arawaks, brought gifts, prepared food, and traded everything they owned. Columbus wrote that the natives, “are so naïve and so free with their possessions that no one who has not witnessed them would believe it. When you ask for something they have, they never say no. To the contrary, they offer to share with anyone.” 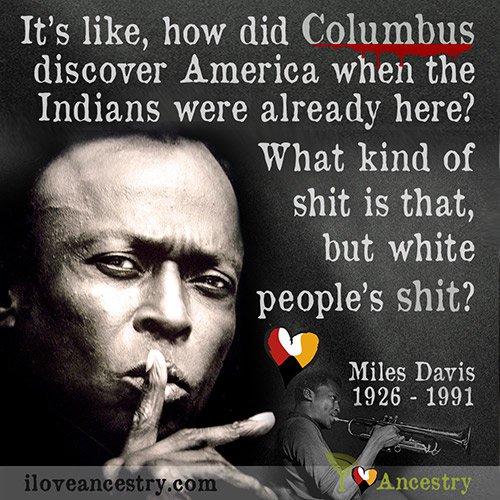 “I believe that they would easily be made Christians, because it seemed to me that they had no religion.”

The European settlers took a free society without possessions, property, currency, hierarchy or written religion and replaced it with today’s America – the world’s shining beacon of selfish materialism, where every square inch of land/water/airspace is publicly or privately owned, taxed, and governed through a corrupt hierarchical system of laws and regulations where Mother Nature’s gifts are treated as personal possessions to be bought, sold, owned and defended.

“As soon as I arrived in the Indies, on the first Island which I found, I took some of the natives by force in order that they might learn and might give me information of whatever there is in these parts.”

Never Forget. The information that Columbus wanted most was: Where is the gold? … His second expedition was given seventeen ships and more than twelve hundred men. The aim was clear: slaves and gold … They went from island to island in the Caribbean, taking Indians as captives … roaming the island in gangs looking for gold, taking women and children as slaves for sex and labor.

“It was his [Columbus’] avowed aim to ‘convert the heathen Indians to our Holy Faith’ that warranted the enslaving and exporting of thousands of Native Americans. That such treatment resulted in complete genocide did not matter as much as that these natives had been given the opportunity of everlasting life through their exposure to Christianity. The same sort of thinking also gave Westerners license to rape women. In his own words, Columbus described how he himself ‘took [his] pleasure’ with a native woman after whipping her ‘soundly’ with a piece of rope.” 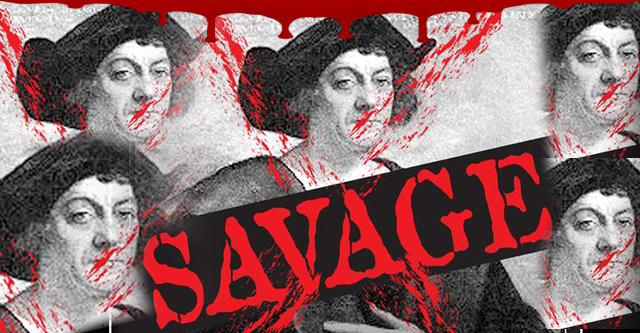 Never Forget. By 1496 the settlers were responsible for 34 million Native American deaths. We are not talking about some guy who accidentally bumped into America looking for a spice-trade route to India, but that’s what the standardized textbooks continue to tell our children about him.

Personally, I don’t even know why the mainstream historical texts say he ‘discovered America’ since Natives were obviously in America long before he was, AND for the fact that most of the tribes he slaughtered or enslaved were in the Caribbean. (There is ZERO evidence that he even found ‘the mainland of North America‘. There are some claims that he landed somewhere in the Florida Keys, but it’s hard to say if they’re true at this point.)

There is absolutely, positively NO GOOD REASON to give this mass murderer a holiday/annual memorial celebration. To do so is an insult to MILLIONS of Native Americans. And, pretty much everybody who bothers to research their history deeper than the sugar-coated lies they feed us in school…

SOURCE: “The Truth about Christopher Columbus” by GrayWolf

← Declaration of Independence: The 4th of July, 1776 Origin of Word Indian Pertaining to American Indians →