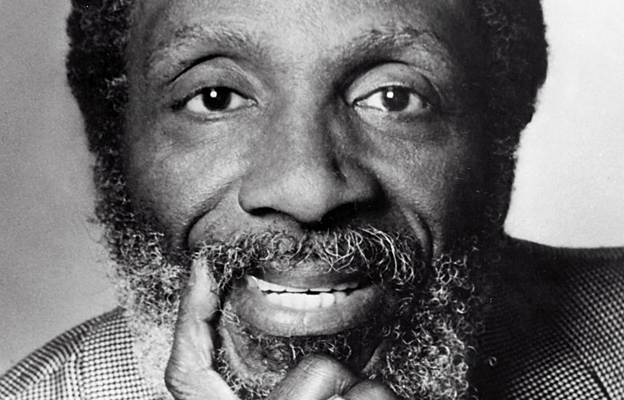 Richard Claxton “Dick” Gregory (October 12, 1932 – August 19, 2017) participated in the Civil Rights movement of the 1960s is well-documented, as are his efforts on behalf of American Indians, for world peace and against hunger.

Elder Nancy Shippentower, from the Puyallup Tribe, was kind enough to send a letter about Dick Gregory’s work with the Tribes of the Pacific Northwest during the Fish Wars to Gyasi Ross. You can find it at the bottom of this article.

Legendary Activist Dick Gregory was on the frontline in the sixties during the Civil Rights Era; he continued to be a “drum major for justice and equality.” Dick Gregory was arrested for civil disobedience several times.

As a part of his activism, he went on several hunger strikes to publicize the world hunger problem, to draw attention to the nation’s drug abuse epidemic, and to emphasize the plight of the American Indians.

After a childhood of poverty in St. Louis, Dick Gregory attended college on a track scholarship and later served two years in the army. In the middle 1950s, he concentrated on finding work as a comedian, always having had, as he says, “a good rap.”

As he became better established as a comedian, Gregory put his convictions into practice by devoting much of his time to the civil rights movement of the 1960s.

On behalf of the Southern Christian Leadership Conference, the Congress on Racial Equality, and other prominent civil rights organizations, Dick Gregory made appearances at demonstrations, marches, and rallies throughout the country.

Dick Gregory and his activism spurred him to run for mayor of Chicago in 1966 and for president in 1968 which garnered substantial media attention. 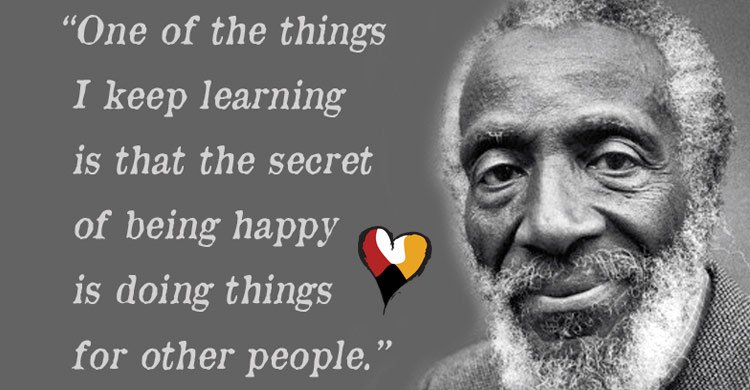 Many Native American Indians, including Janet McCloud retaliated with their own adaptation of 1960s civil disobedience — fish-ins — to protest interference with treaty rights.

The war also continued in the media as a parade of the famous came to support the American Indian cause: Marlon Brando was arrested in 1964 while “helping some Indian friends fish” on the Puyallup River, Dick Gregory was jailed for joining the American Indians in illegal fishing. 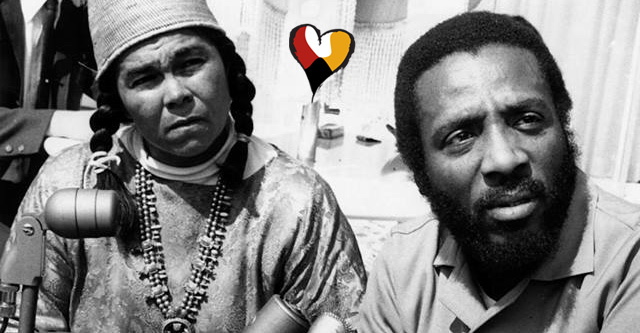 “I never learned hate at home, or shame. I had to go to school for that.”

In the early 1970s, Dick Gregory abandoned comedy to focus on his political interests, which widened from race relations to include such issues as violence, world hunger, capital punishment, drug abuse, and poor health care.

Gregory ran for President of the United States in 1968 as a write-in candidate of the Freedom and Peace Party, which had broken off from the Peace and Freedom Party. Gregory became an outspoken critic of the Warren Commission findings that President JFK was assassinated by Lee Harvey Oswald.

On March 6, 1975, Gregory and assassination researcher Robert Groden appeared on Geraldo Rivera’s late-night ABC talk show Goodnight America. An important historical event happened that night when the famous Zapruder film of JFK’s assassination was shown to the public on TV for the first time in history.

The public’s response and outrage to that showing led to the forming of the Hart-Schweiker investigation, which contributed to the Church Committee Investigation on Intelligence Activities by the United States, which resulted in the House Select Committee on Assassinations investigation.

The Women’s Movement was largely successful in securing gender equality in-laws and society.

Gregory and Mark Lane conducted landmark research into the assassination of Dr. Martin Luther King, Jr., which helped move the U.S. House Assassinations Committee to investigate the murder, along with that of John F. Kennedy.

Mark Lane was the author of conspiracy theory books such as Rush to Judgment. The pair wrote the MLK conspiracy book Code Name Zorro, which postulated that convicted assassin James Earl Ray did not act alone.

“I am really enjoying the new Martin Luther King Jr. stamp – just think about all those white bigots, licking the backside of a black man.” 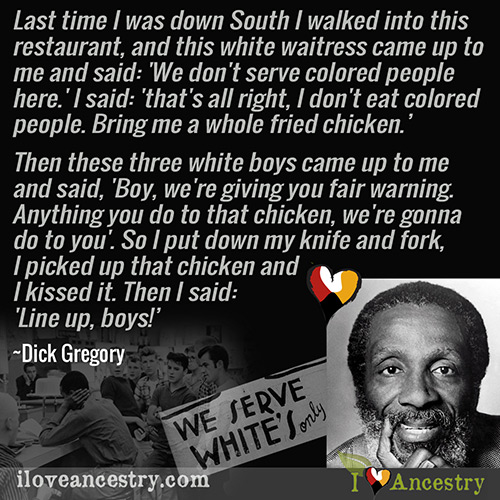 “Last time I was down South I walked into this restaurant, and this white waitress came up to me and said: ‘We don’t serve colored people here.’ ” I said: ‘that’s all right, I don’t eat colored people. Bring me a whole fried chicken.”

“Then these three white boys came up to me and said, ‘Boy, we’re giving you fair warning. Anything you do to that chicken, we’re gonna do to you’. “So I put down my knife and fork, I picked up that chicken and I kissed it. Then I said, ‘Line up, boys!”

Dick Gregory was an outspoken activist during the US Embassy Hostage Crisis in Iran. In 1980 he traveled to Tehran to attempt to negotiate the hostages’ release and engaged in a public hunger strike there, weighing less than 100 pounds (45 kg) when he returned to the United States.

In 1998 Dick Gregory spoke at the celebration of the birthday of Dr. Martin Luther King, Jr. with President Bill Clinton in attendance. Not long after, the President told Gregory’s long-time friend and P.R. Consultant, Steve Jaffe, “I love Dick Gregory; he is one of the funniest people on the planet.”

They spoke of how Gregory had made a comment on Dr. King’s birthday that broke everyone into laughter when he noted that the President made Speaker Newt Gingrich ride “in the back of the plane,” on an Air Force One trip overseas.

Since the late 1980s, Gregory has been a figure in the health food industry by advocating for a raw fruit and vegetable diet.

At a Civil Rights rally marking the 40th anniversary of the Voting Rights Act, Dick Gregory criticized the United States, calling it “the most dishonest, ungodly, unspiritual nation that ever existed in the history of the planet.

As we talk now, America is 5 percent of the world’s population and consumes 96 percent of the world’s hard drugs”. In response to published allegations that the Central Intelligence Agency (CIA) had supplied cocaine to predominantly Black American areas in Los Angeles, thus spurring the crack epidemic, Dick Gregory protested at CIA headquarters and was arrested.

Gregory announced a hunger strike on September 10, 2010, saying in a commentary published by the Centre for Research on Globalisation in Montreal that he doubted the official U.S. report about the attacks on September 11, 2001.

“One thing I know is that the official government story of those events, as well as what took place that day at the Pentagon, is just that, a story. This story is not the truth, but far from it. I was born on October 12, 1932. I am announcing today that I will be consuming only liquids beginning Sunday until my eightieth birthday in 2012 and until the real truth of what truly happened on that day emerges and is publicly known.”

A Letter from a Native Elder: Dick Gregory Was a Warrior Who Sacrificed Powerfully For Native People

If you do not know about the Fish Wars, please read up. Nancy comes from a long line of resistors and warriors, including Uncle Billy Frank, Janet McCloud and Don McCloud. She knows warriors. Dick Gregory was a warrior for Native people and for justice all over the world. Rest in Peace.

I was in the mountains when i heard about Dick Gregory this morning, it was very sad news. I always hoped I could have went to see him. I was thinking about this this year.

Dick came into our lives when I was about 14 or 15. He did a comedy act on the waterfront at the Seattle Yachts Club and Ivar’s Chowderhouse.

He was meeting with all our people and raising money for their bail or to buy boats and other necessary items to stay strong in our Indigenous rights and treaty rights.

Both Dick Gregory and Marlon Brando went to jail. Dick went to Thurston County and Marlon went to Pierce County. The difference was that Dick got sentenced to 6 months in jail and Marlon didn’t.

When he went to jail he went on a fast, and almost died. My mother Janet McCloud went with a bunch of her kids and teenagers and we set up a teepee and tents across from the jail on the Capitol grounds.

They were asked why they were there and her reply was, ‘We will be here till Dick is released from jail.’

There was a lot of harassment and one day Robert Culp & his wife Francis Nyune came to court to ask the judge to release Dick. The judge said, ‘this is not going to be a celebrity mockery of justice’ and told them ‘no.’

After a few days/weeks of fasting, he declined in health. The county sent for his wife Lillian and she came they took him to St. Peters’ Hospital with armed guards and wanted her to sign for his IV feeding.

She met with Dick and came out and said ‘no.’ They then tried to court order the feeding and were denied. Finally, the judge said ‘he’s not dying on my watch,’ and ordered his immediate release.

In the meantime they turned the sprinklers on the encampment and arrested 8 teenagers. My mom, Janet McCloud, then knew they were releasing him.

I tell his story because during that time no tribes would touch the so called ‘illegal fisher people.’ In fact, they were called ‘renegades’ but I believe with Dick Gregory going to jail like that, it enlightened everyone.

He brought media attention to the plight of our people and I will always be grateful for his perseverance in the injustices he spoke about and defended.

He stayed for awhile because he was so malnourished and he had to regain his strength. He was a lot of fun and told stories. He and my dad, Don McCloud, were good storytellers.

(To Dick Gregory’s wife) Lillian, I am truly sorry for the great loss you have just went through. You are in my prayers and he will always be remembered I will never forget this man who opened the eyes to all injustices throughout the world.

Gyasi, as you can see in some of the pictures that Hank posted, he was well received within the tribe. That envelope with the teepee drawn on it is my mom’s handwriting; when they returned things back it did not go back to her but to other people.

We met him again at the University of Puget Sound; he was giving a talk and we stood up afterwards and talked about what he did for our people.

Laura talked because she was one the teenagers who went to jail on the Capitol grounds. He talked about his stay in jail and was happy to see us; he had heard about mom passing and spoke a few words about her.

The problem I’m seeing is that fewer people can carry the weight of what these leaders carried in those days. Not only was he fighting the state on our behalf, but he was also fighting for his own people in the south and also over here.

When we were camping, the Black Panthers came in the evening and met with mom and wanted to send a message to Mr. Gregory so she delivered it. I don’t know what was in those messages, I was too young yet.”

SOURCE:  Based on materials from Wikipedia, dickgregory.com