Reign of Terror: US Domestic Covert Action of the 1970s 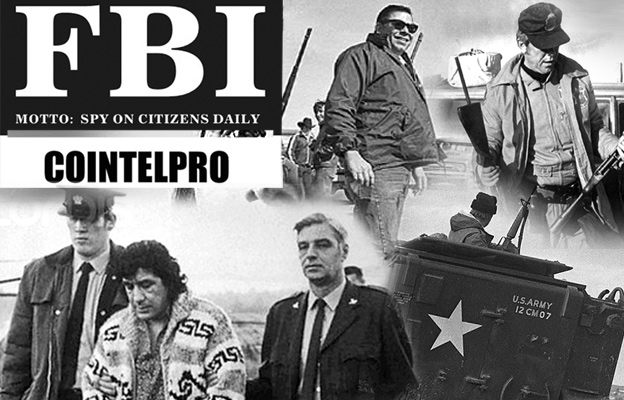 US Domestic Covert Action: Reign of Terror Against American Indians in the 1970s. COINTELPRO’s residual effects. It did not end there…

Indeed Domestic Covert Action Did Not End. U.S Government Harassment, Intimidation & Violence against “THE NATIVE AMERICAN MOVEMENT”… While domestic covert operations were scaled down once the 1960s upsurge had subsided (thanks in part to the success of COINTELPRO), they did not stop.

In its April 27, 1971 directives disbanding COINTELPRO, the FBI provided for future covert action to continue “with tight procedures to ensure absolute security.” The results are apparent in the record of 1970s covert operations which have so far come to light.

1970s FBI attacks on resurgent Native American resistance have been well documented by Ward Churchill and others. In 1973, the Bureau led a paramilitary invasion of the Pine Ridge Indian Reservation in South Dakota as American Indian Movement (AIM) activists gathered there for symbolic protests at Wounded Knee, the site of the 1890 massacre of Native American Indians.

In the following years, the FBI and its allies waged all-out war on AIM and the Native people. From 1973-76, they killed 69 residents of the tiny Pine Ridge reservation, a rate of political murder comparable to the first years of the Pinochet regime in Chile.

To justify such a reign of terror and undercut public protest against it, the Bureau launched a complementary program of psychological warfare. Central to this effort was a carefully orchestrated campaign to reinforce the already deeply ingrained myth of the “Indian savage.”

In one operation, the FBI fabricated reports that AIM “Dog Soldiers” planned widespread “sniping at tourists” and “burning of farmers” in South Dakota. The son of liberal U.S. Senator (and Arab-American activist) James Abourezk, was named as a “gunrunner,” and the Bureau issued a nationwide alert picked up by media across the country.

A bogus AIM note taking credit for the killing was found pinned to a signpost near the murder site, along with a bundle of hair said to be the victim’s “scalp. ” Newspaper headlines screamed of “ritual murder” by “radical Indians.”

By the time the defendants were finally cleared of the spurious charges, many of AIM’s main financial backers had been scared away and its work among a major urban concentration of Native people was in ruin.

In March 1975, a central perpetrator of this hoax, AIM’s national security chief Doug Durham, was unmasked as an undercover operative for the FBI. As AIM’s liaison with the Wounded Knee Legal Defense/Offense Committee during the trials of Dennis Banks and other Native American leaders, Durham had routinely participated in confidential strategy sessions.

He confessed to stealing organizational funds during his two years with AIM, and to setting up the arrest of AIM militants for actions he had organized. It was Durham who authored the AIM documents that the FBI consistently cited to demonstrate the group’s supposed violent tendencies.

When the smoke cleared, AIM activist Joe Stuntz Killsright and two FBI agents lay dead. The media, barred from the scene “to preserve the evidence,” broadcast the Bureau’s false accounts of a bloody “Indian ambush,” and the congressional hearings were quietly canceled.

The FBI was then free to crush AIM and clear out the last pockets of resistance at Pine Ridge. It launched what the Chairman of the U.S. Civil Rights Commission described as “a full-scale military-type invasion of the reservation” complete with M-16s, Huey helicopters, tracking dogs, and armored personnel carriers.

Eventually, AIM leader Leonard Peltier was tried for the agents’ deaths before a right-wing judge who met secretly with the FBI.

AIM member Anna Mae Aquash was found murdered after FBI agents threatened to kill her unless she helped them to frame Peltier. Peltier’s conviction, based on perjured testimony and falsified FBI ballistics evidence, was upheld on appeal.

(The panel of federal judges included William Webster until the very day of his official appointment as Director of the FBI.) Despite mounting evidence of impropriety in Leonard Peltier ‘s trial, and Amnesty International’s call for a review of his case, the Native American leader remains in maximum security prison.

← COINTELPRO against the Black Movement of the 1970s FBI's COINTELPRO: American Terrorism Exposed in the 1970s →