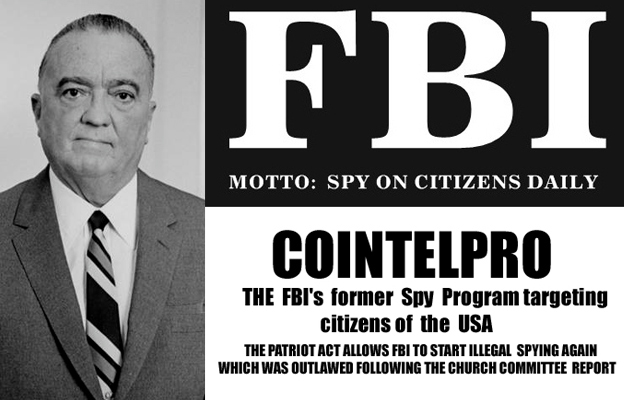 COINTELPRO is an acronym for the FBI’s Counter Intelligence Program, which was used in the 1960s to monitor, manipulate and disrupt social movements in the United States.

During COINTELPRO Dr. Martin Luther King, Jr., the Black Panthers, and the American Indian Movement were among the program’s targets. Covert Action Against the Domestic Dissidents of the 1960s.

Read about:
US Domestic Covert Action: Reign of Terror (1970s)
COINTELPRO against The Black Movement, 1970s

The first concrete evidence of COINTELPRO surfaced in March 1971, when a “Citizens Committee to Investigate the FBI” removed secret files from an FBI office in Media, Pennsylvania and released them to the press.’ That same year, agents began to resign from the Bureau and to blow the whistle on its covert operations.’

These revelations came at a time of enormous social unrest and declining public confidence in the government. Publication of the Pentagon Papers in September 1971 exposed years of systematic official lies about the Vietnam War. Soon it was learned that a clandestine squad of White House “plumbers” had broken into Daniel Ellsberg’s psychiatrist’s office in an effort to smear the former Pentagon staffer who had leaked the top-secret papers to the press

The same “plumbers” were caught the following year burglarizing the Watergate offices of the Democratic National Committee. Nationally televised congressional hearings on Watergate revealed a full-blown program of “dirty tricks” to subvert the anti-war movement as well as the Democratic Party by forging letters, leaking false news items to the press, stealing files, and roughing up demonstrators.

Read about: US Domestic Covert Action: Reign of Terror (1970s)

Lines of command for these operations were traced to Attorney General Mitchell and the White House, with the FBI implicated in a massive cover-up involving President Nixon and his top staff. By 1971, congressional hearings had already disclosed U.S. Army infiltration of domestic political movements.

This crisis was eventually resolved through what historian Howard Zinn describes as “a complex process of consolidation,” based on “the need to satisfy a disillusioned public that the system was criticizing and correcting itself.”‘

In this process, the U.S. Freedom of Information Act (FOLA) was amended over President Nixon’s veto to provide some degree of genuine public access to FBI documents. Lawsuits under the FOLA forced the Bureau to release some COINTELPRO files to major news media. By 1975, both houses of Congress had launched formal inquiries into government “intelligence activities.”

Read about COINTELPRO against The Black Movement, 1970s

The agencies under congressional investigation were allowed to withhold most of their files and to edit the Senate Committee’s reports before publication. The House Committee’s report, including an account of FBI and CIA obstruction of its inquiry, was suppressed altogether after part was leaked to the press.

Still, the pressure to promote the appearance of genuine reform was so great that the FBI had to divulge an unprecedented, detailed account of many of its domestic covert operations.

Many important files continue to be withheld, and others have been destroyed. Former operatives report that the most heinous and embarrassing actions were never committed to writing.

Officials with broad personal knowledge of COINTELPRO have been silenced, most notably William C. Sullivan, who created the program and ran it throughout the 1960s.

Sullivan was killed in an uninvestigated 1977 “hunting accident” shortly after giving extensive information to a grand jury investigating the FBI, but before he could testify publicly. Nevertheless, a great deal has been learned about COINTELPRO.

Read about:
US Domestic Covert Action: Reign of Terror (1970s)
COINTELPRO against The Black Movement, 1970s