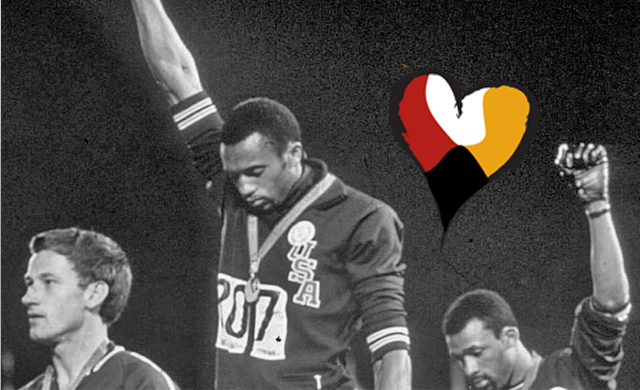 Black Power Salute: It was expected that Americans would dominate the track at the 1968 Summer Olympics in Mexico City. Indeed, when the men’s 200-meter began, American Tommie Smith led the pack, sprinting ahead to take gold. But it’s what happened next on October 16, 1968 that would make history.

“We owe it to our Ancestors and to the sacrifices that they made, to continue to achieve higher goals, while maintaining our identity. Stand Up! Stand OUT!”

Heading into the home stretch, it looked as if teammate and world-record holder John Carlos would win silver, but Australian Peter Norman edged him out, bounding down the straightaway to take silver and leaving Carlos with bronze.

In the 1968 photo above, Tommie Smith, center, and John Carlos, right, stare downward with their fists in the air during the ‘Star Spangled Banner’ after receiving the gold and bronze medals for the 200 meter run.

Smith and Carlos stood on the podium wearing black socks without shoes to symbolize black poverty in the U.S. Carlos wore a strand of colorful beads to protest lynching. They bowed their heads as The Star Spangled Banner played, and raised their fists — clad in black leather gloves — in salutes to Black Power and unity. It was a gesture seen around the world, and an enduring symbol of political resistance. Black Power Salute. 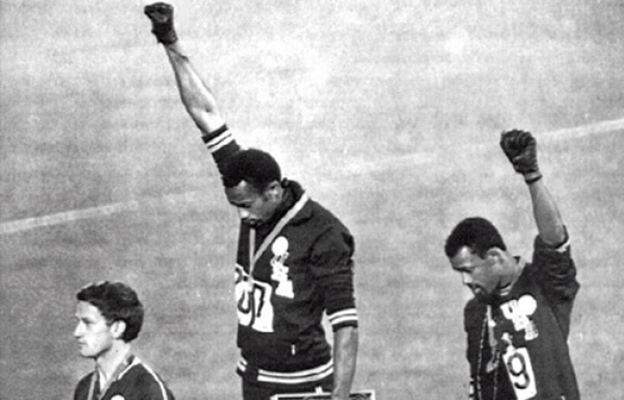 This fleeting moment, though, came out of the deep-rooted struggle for racial equality gripping America. Smith and Carlos had been part of the Olympic Project for Human Rights, which, founded in 1967, had originally called upon black athletes to boycott the Summer Games.

The movement’s mission statement asked, “Why should we run in Mexico only to crawl home?” Ultimately the group decided against the boycott, but Smith and Carlos embodied their message of protest. Australian Peter Norman wore an OPHR patch on his jacket during the ceremony as a symbol of solidarity. Black Power Salute. 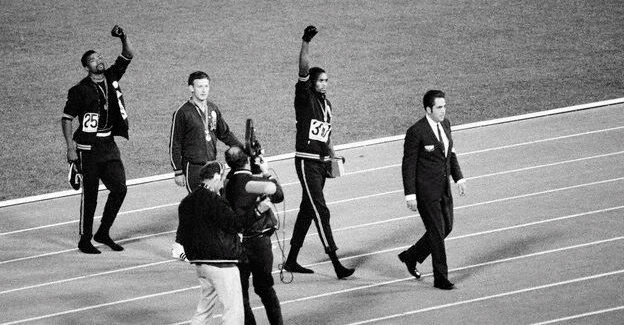 In a 2008 op-ed for the L.A. Times, basketball legend Kareem Abdul-Jabbar, who had been asked to try out for the 1968 Olympic basketball team, described what watching that moment meant. “Whites were outraged, blacks felt some rush of pride,” he wrote.

Carlos, who would go on to equal the world record in the 100-meter, win an NCAA championship title and even play a short stint in the NFL, spoke in Chicago this year. Speaking to an audience of young poets and activists, he said that now, when asked by photographers to raise his fist for the camera, he instead instructs them to find a young person to photograph. “Let some young man or woman raise their fist,” he said. “I want them to see that we’ve moved on to the next generation.”

Dr. John Carlos made world history during the 1968 Olympics in Mexico City, Mexico, when he took to the international stage during the medal ceremony on October 16, 1968 and made a speechless statement, heard and seen worldwide: Black Power Salute.

Winning the 200 meter, John Carlos accepted the Bronze medal at the Olympic podium wearing black socks and no shoes to represent impoverished people who had no shoes of their own, and raised a black-gloved fist crowning a bowed head to humbly reflect the strength of the human spirit.

Headlines were made around the globe and the photograph of the three medalists standing peaceably in protest at the ceremonial podium instantaneously became a historical symbol of the fight for human rights. Black Power Salute.

“If I win, I am American, not a black American. But if I did something bad, then they would say I am a Negro. We are black and we are proud of being black. Black America will understand what we did tonight.”