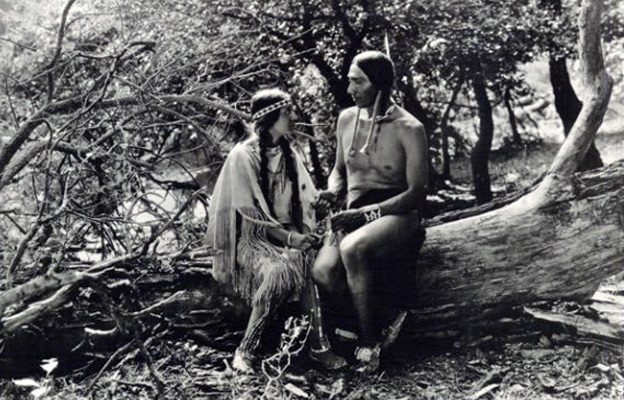 The Daughter of Dawn: Videos of Silent Film With All-Native Cast including Wanada Parker, daughter of Chief Quannah Parker.

The Daughter of Dawn (1920), a silent film featuring an all-Native cast came to be made, lost seemingly forever, was discovered nearly a century later (in shambles), then restored and shown to the cast’s descendants. It sure is one of the most fascinating stories in the annals of American filmmaking.

“Daughter of Dawn” had its world premiere in June 2012 at the dead CENTER Film Festival in Oklahoma City. It may be the only all-Native cast silent film ever made.

Read More:
Full story of The Daughter of Dawn (PDF)

Daughter of Dawn is an 80-minute, six-reel silent film shot in May, June, and July of 1920 in the Wichita Mountains of southwest Oklahoma. Eventually, the Oklahoma Historical Society will release DVD and Blu-ray versions that include director’s cuts on the history of the film, the Indian history, and material culture depicted, the Wichita Mountains, the buffalo herd that still runs free, and a special feature on one tipi in the movie.

It is a significant tipi given by Cheyenne Chief Nikko-se-vast to the Kiowa Chief Dohausen. The tipi in the movie was renewed in 1916 with images painted by Haungooah or Silverhorn and Stephen Mopope, one of the Kiowa Five. That very tipi was given to the Oklahoma Historical Society in 1928. To find out more about this tipi, read the blog post.

The Indians, who had been on the reservation less than fifty years, brought with them their own tipis, horses, clothing, and material culture. The lead actor is White Parker, the son of the great Comanche leader Quanah Parker.

In the film, the Daughter of Dawn is played by Esther LeBarre. Her character is the daughter of the Chief of the Kiowas, played by Hunting Horse. The two young men who are romantically interested in her are White Eagle, played by White Parker, and Black Wolf, played by Jack Sankadota.

Dawn loves White, but the Chief says that Wolf has many ponies so he must consider both as potential husbands for his daughter. So, Wolf loves Dawn. Dawn loves White.

White loves Dawn. And for good measure a fourth person is added to this love triangle. Red Wing, played by Wanada Parker, is in love with Wolf. Both White Parker and Wanada Parker were children of the Comanche Chief Quanah Parker.

The script for the movie was developed by Norbert Myles, an actor, writer, and director brought into the project by Richard Banks, who started the Texas Film Company in 1916. Myles wrote on the cover of his script that, “This story has been made possible by R.E. Banks, whose knowledge of the Indian, and of his traditions, was gained during the twenty-five years that he lived with them.”

Read More:
Full story of The Daughter of Dawn (PDF)

SOURCE: Based on materials from IndianCountryTodayMediaNetwork.com by Jordan Wright and from Oklahoma Historical Society