COINTELPRO against the Black Movement of the 1970s 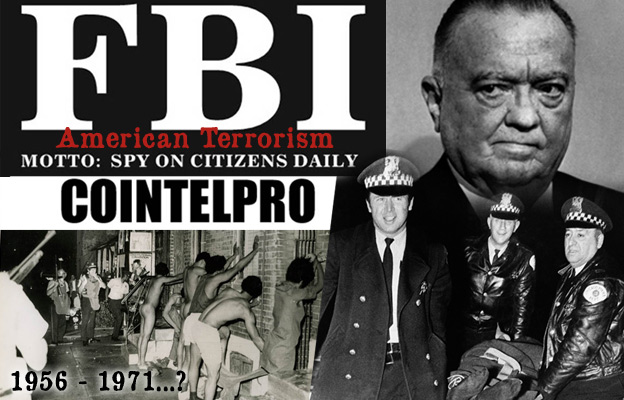 The Black Movement targeted… While domestic covert operations were scaled down once the 1960s upsurge had subsided (thanks in part to the success of COINTELPRO), they did not stop. The Black Movement was one of the targets.

In its April 27, 1971 directives disbanding COINTELPRO, the FBI provided for future covert action to continue “with tight procedures to ensure absolute security.” The results are apparent in the record of 1970s covert operations which have so far come to light:

Government covert action against the Black Movement also continued in the 1970s. Targets ranged from community-based groups to the Provisional Government of the Republic of New Afrika and the surviving remnants of the Black Panther Party.

“Prevent the RISE OF A “MESSIAH” who could unify, and electrify, the militant black nationalist movement. Malcolm X might have been such a “messiah;” he is the martyr of the movement today. Martin Luther King, Stokely Carmichael and Elijah Muhammed all aspire to this position. Elijah Muhammed is less of a threat because of his age. King could be a very real contender for this position should he abandon his supposed “obedience” to “white, liberal doctrines” (nonviolence) and embrace black nationalism. Carmichael has the necessary charisma to be a real threat in this way.”

“War at Home” by Brian Glick: Domestic Covert Action Did Not End in the 1970s…

In Mississippi, federal and state agents attempted to discredit and disrupt the United League of Marshall County, a broad-based grassroots civil rights group struggling to stop the Klan violence.

In California, a notorious paid operative for the FBI, Darthard Perry, code-named “Othello,” infiltrated and disrupted local Black groups and took personal credit for the fire that razed the Watts Writers Workshop’s multi-million dollar cultural center in Los Angeles in 1973.

In the mid-1970s, the U.S. Bureau of Alcohol, Tobacco and Firearms (ATF) conspired with the Wilmington, North Carolina police to frame nine local civil rights workers and the Rev. Ben Chavis, field organizer for the Commission for Racial Justice of the United Church of Christ.

Chavis had been sent to North Carolina to help Black communities respond to escalating racist violence against school desegregation. Instead of arresting Klansmen, the ATF and police coerced three young Black prisoners into falsely accusing Chavis and the others of burning white-owned property.

Although all three prisoners later admitted they had lied in response to official threats and bribes, the FBI found no impropriety. The courts repeatedly refused to reopen the case and the Wilmington Ten served many years in prison before pressure from international religious and human rights groups won their release.

As the Republic of New Afrika (RNA) began to build autonomous Black economic and political institutions in the deep South, the Bureau repeatedly disrupted its meetings and blocked its attempts to buy land.

On August 18, 1971, four months after the supposed end of COINTELPRO, the FBI and police launched an armed pre-dawn assault on national RNA offices in Jackson, Mississippi.

Carrying a warrant for a fugitive who had been brought to RNA Headquarters by FBI informer Thomas Spells, the attackers concentrated their fire where the informer’s floor plan indicated that RNA President Imari Obadele slept.

Though Obadele was away at the time of the raid, the Bureau had him arrested and imprisoned on charges of conspiracy to assault a government agent.

The COINTELPRO-triggered collapse of the Black Panthers’ organization and support in the winter of 1971 left them defenseless as the government moved to prevent them from regrouping.

On August 21, 1971, national Party officer George Jackson, world-renowned author of the political autobiography Soledad Brother, was murdered by San Quentin prison authorities on the pretext of an attempted jailbreak.

In July 1972, Southern California Panther leader Elmer “Geronimo” Pratt was successfully framed for a senseless $70 robbery-murder committed while he was hundreds of miles away in Oakland, California, attending Black Panther meetings for which the FBI managed to “lose” all of its surveillance records.

Documents obtained through the Freedom of Information Act later revealed that at least two FBI agents had infiltrated Pratt’s defense committee. They also indicated that the state’s main witness, Julio Butler, was a paid informer who had worked in the Party under the direction of the FBI and the Los Angeles Police Department.

For many years, FBI Director Webster publicly denied that Pratt had ever been a COINTELPRO target, despite the documentary proof in his own agency’s records.

Also targeted well into the 1970s were former Panthers assigned to form an underground to defend against armed government attack on the Party. It was they who had regrouped as the Black Liberation Army (BLA) when the Party was destroyed.

FBI files show that, within a month of the close of COINTELPRO, further Bureau operations against the BLA were mapped out in secret meetings convened by presidential aide John Ehrlichman and attended by President Nixon and Attorney General Mitchell.

In the following years, many former Panther leaders were murdered by the police in supposed “shoot-outs” with the BLA. Others, such as Sundiata Acoli, Assata Shakur, Dhoruba Al-Mujahid Bin Wahad (formerly Richard Moore), and the New York 3 (Herman Bell, Anthony “Jalil” Bottom, and Albert “Nuh” Washington) were sentenced to long prison terms after rigged trials.

In the case of the New York 3, FBI ballistics reports withheld during their mid-1970s trials show that bullets from an alleged murder weapon did not match those found at the site of the killings for which they are still serving life terms.

The star witness against them has publicly recanted his testimony, swearing that he lied after being tortured by police (who repeatedly jammed an electric cattle prod into his testicles) and secretly threatened by the prosecutor and judge.

The same judge later dismissed petitions to reopen the case, refusing to hold any hearing or to disqualify himself, even though his misconduct is a major issue.

As the NY3 continued to press for a new trial, their evidence was ignored by the news media while their former prosecutor’s one-sided, racist “docudrama” on the case, Badge of the Assassin, aired on national television.