America’s political prisoner Leonard Peltier is an Anishinabe-Lakota activist and member of the American Indian Movement (AIM) who was born in 1944.

In 1977 he was [wrongly] convicted and sentenced to two consecutive terms of life imprisonment for first-degree murder in the shooting of two Federal Bureau of Investigation (FBI) agents during a 1975 conflict on the Pine Ridge Indian Reservation.

Peltier’s indictment and conviction have been the subject of much controversy; Amnesty International placed his case under the “Unfair Trials” category of its Annual Report: USA 2010, citing concerns with the fairness of the proceedings. Peltier is incarcerated at the Coleman Federal Correctional Complex, Florida.

In the Badlands of South Dakota on the Pine Ridge Indian Reservation, the mystery of exactly what occurred here on June 26th, 1975 is still unsolved. In this period of increased violence, the reservation was the site of an armed confrontation between AIM activists and the FBI, which became known as the Pine Ridge Shootout.

Two FBI agents, Jack R. Coler and Ronald A. Williams, and the AIM activist Jim Stuntz was killed. The U.S. prosecution of suspects in the execution-style deaths of the FBI agents led to trials: AIM members Robert Robideau and Dino Butler were acquitted.

Leonard Peltier was extradited from Canada, tried separately because of the delay, and convicted of aiding and abetting the murders of the two FBI agents. He was sentenced to two consecutive life sentences and has not been granted parole.

“A political prisoner is someone who is out fighting for his or her people’s rights and freedom and is imprisoned for that alone.”

Amnesty International is calling for Leonard Peltier’s immediate release. Peltier has his own defense committee, with an Internet site, and even has support on Capitol Hill.

“I have no doubt whatsoever that the real motivation behind both Wounded Knee II and the Oglala firefight, and much of the turmoil throughout Indian Country since the early 1970s, was—and is—the mining companies’ desire to muffle AIM and all traditional Indian people, who sought—and still seek—to protect the land, water, and air from their thefts and depredations. In this sad and tragic age we live in, to come to the defense of Mother Earth is to be branded a criminal.”

Video Playlist about the life and imprisonment of Leonard Peltier

“The United States government can indict you on something, and now you’ve got to prove your innocence. And that’s not the Constitution of the United States.”

Leonard Peltier will be welcomed with open arms upon his return to his loved ones. He is an iconic political prisoner of the USA and needs to be set free, he has done more than enough time regardless of the FBI’s misconduct in gaining a guilty verdict. We honor Leonard.

The Oglala Commemoration, The LP-DOC and The Oglala Lakota Tribe are very excited to announce that June 26th had been declared Leonard Peltier Day.

Whereas, June 26, 1975, is a historical day on the Pine Ridge Indian Reservation, and

Whereas, The Oglala Sioux Tribe holds in high esteem people who stand for peace, justice and freedom, and

Whereas, Leonard Peltier, a man asked to stand and protect traditional elders and the Lakota Oyate, sacrificed himself that day, and

Whereas, we hereby proclaim this day so the Oyate and the world will know and honor Mr. Peltier and remember that we as a people continue to heal, and

Whereas, although Mr. Peltier cannot be in attendance for this historic event, we must and will continue his work to heal a nation through human rights, social rights and indigenous rights all over the world, now

Therefore, pursuant to vested authority, we do as President and Vice President of the of the Oglala Sioux Tribe, hereby proclaim June 26, 2013 as a day of honoring for Mr. Leonard Peltier and hereafter every 26th day of June. 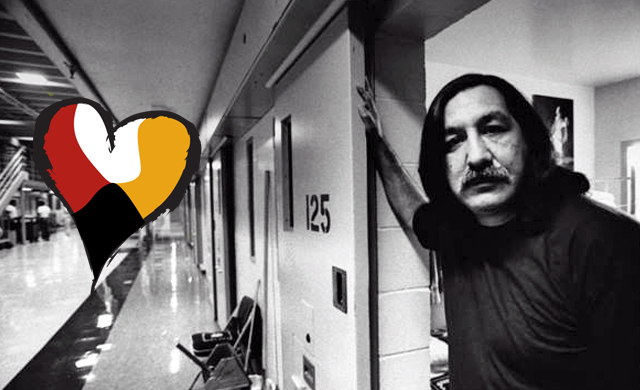 For more than 40 years now, Leonard Peltier has been in prison. The injustices run deep. Learn more and get fired up to do something!