“Despite being the self-described “Angriest Black Man in America,” I agree with many whites who argue that Black History Month should be abolished. But we agree for totally different reasons.”

They want it abolished because they’re either, at best, racially insensitive or, at worst, just plain racist. That’s why they take the emotionally based position that Black History Month is nothing more than some reverse racism entitlement nonsense that gives credit to a whiny race of shiftless people who have always received much more than they have ever given to America and the colonies.

Furthermore, they claim, Black History Month is unfair to white ethnics whose ancestors came here through Ellis Island and were subjected to harsh discrimination. But, they contend, instead of complaining, their ancestors simply fought through it, pulled themselves up by their own bootstraps, and in just a few generations became educated, successful, and even prosperous members of society, living the American Dream.

Moreover, they say, they never needed no damn English, Italian, German, Polish, or other history month because their superior actions spoke louder than inferior words. Therefore, they opine, Black History Month should be abolished.

I take the fact-based position that, from the very beginning, this annual celebration of black achievement was never intended to be permanent as an isolated event. Quite the contrary, it was always intended to merge into and become American history– which is precisely what it is. That’s why Black History Month should be abolished.

Let’s briefly discuss why African Americans even got Black History Month in the first place. Much of it started when Carter G. Woodson — later recognized by many as the “Father of Black History” — was a student at Harvard University where, in 1912, he became the first person of enslaved parents to receive a PhD from that elite Ivy League school.

While in class one day, one of his white professors, Edward Channing, lectured that “The negro had no history.” And this contention was widespread at the time throughout this country’s educational system. But on that particular day, hearing it from the mouth of an instructor at America’s leading university, Woodson was propelled to do something about it.

So after expanding and compiling his own extensive research, he connected with four men and on September 9, 1915, in Chicago, inspired by that city’s national celebration of the 50th anniversary of emancipation, which highlighted the remarkably impressive progress of blacks since their enslavement, they founded what is now known as the Association for the Study of African American Life and History (ASALH).

Its mission, as “the premier Black Heritage and learned society,” is to “promote, research, preserve, interpret and disseminate information about Black life, history, and culture to the global community.”

To that end, among several other enlightening projects throughout the decade, Woodson and the association publicly announced Negro History Week in 1925 and first celebrated it in February 1926.

Although many people believe that Woodson and the organization chose February because Abe Lincoln and Frederick Douglass were born in that month, that’s only part of the reason. The complete reason is what he described as tradition.

He recognized that ever since Lincoln’s assassination in 1865 and ever since Douglass’s death in 1895, black folks had begun commemorating the work, and as a result the birthday, of each of those two great men.

Accordingly, in order to reap the benefits of pre-existing, Negro issue-related popularity, Woodson decided to merge into what was already a celebratory and prideful time for African Americans. It went from Negro History Week to Black History Week in 1972 and then Black History Month in 1976.

A little known fact about Negro History Week is that Woodson, according to the ASALH, “never viewed black history as a one-week affair. He pressed for schools to use Negro History Week to demonstrate what students learned all year. It was in this sense that blacks would learn of their past on a daily basis that he look 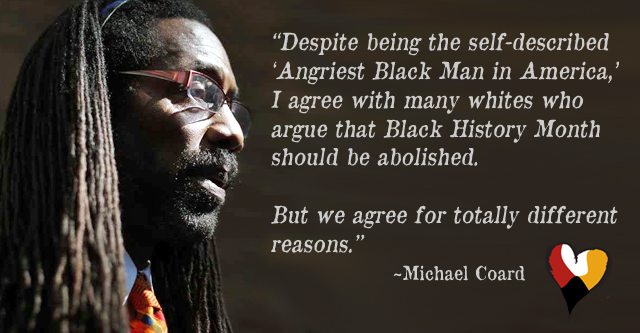 ed forward to the time when an annual celebration would no longer be necessary.” Also, he “believed that black history was too important to America and the world to be crammed into a limited time frame. He spoke of a shift from Negro History Week to Negro History Year.”

This is the very same position taken by my mentor, the dearly departed Shirley Turpin-Parham, past president of the Philadelphia-Montgomery County branch of ASALH and professor of history at Cheyney University.

That’s precisely why I say abolish Black History Month. It’s much too important to be “crammed into a limited time frame.” It requires a year’s worth of official recognition every year. Why? Because it’s American history, and it’s world history.

Unlike white ethnics who voluntarily came here with bootstraps to pull up, black folks were kidnapped, shackled and dragged here bootless beginning in 1619 in Jamestown, Virginia, when they were enslaved and forced to toil endlessly to build the colonies and later this country.

Despite that, more than 5,000 of them willingly served in the Revolutionary War to liberate this country; they also fought in the Civil War, WWI and WWII. That’s American history, not black history!

Twelve of this country’s presidents enslaved black men, women, and children — eight of them while in office. That’s American history, not black history!

Enslaved black human beings dug the foundation for the White House. They toiled as expert masons in the quarries for the stone used for the building’s walls, dug up clay for thousands of the bricks, chopped down trees to make space and use for paneling; this was backbreaking labor without any compensation whatsoever. And after they built it, they were constrained to work inside as domestic servants from at least 1800 through the Civil War.

Furthermore, as documented in a congressional task force’s report entitled “History of Slave Laborers in the Construction of the United States Capitol,” they constructed the Capitol, too.

It was none other than a master craftsman and artisan Philip Reid, born into slavery in the early 1800s in South Carolina, who supervised the adroit assembling, the meticulous bronze casting, and the skillful placement of the five-ton Statue of Freedom atop the Capitol in 1863. That’s American history, not black history!

In addition to the history of the White House, there’s history right here in Philly. And that history is the enslavement of black men, women and children by this country’s first president, George Washington, at America’s first “White House,” formally called the President’s House at Sixth and Market next to the Liberty Bell Center.

An organization by the name of Avenging the Ancestors Coalition, of which I am a proud co-founder, led the successful battle to commemorate that site. And our current battle, headed by the prominent historian and scholar Edward W. Robinson, Jr., another dearly departed mentor, is to convince the school district to finally infuse African and American-American history—i.e., world history—into the official curriculum, making it a required course for graduation.

Shouldn’t students and all Americans know, for example, that the first human being on the planet was an African from the Nile Valley region of East Africa 200,000 years ago, that Africans invented geometry, calculus, and algebra, that “Amen” and “Christ” are Egyptian (meaning North African) words and concepts?

And shouldn’t they know, for example, that the light bulb was primarily the work of an inventor hired as Thomas Edison’s expert witness in patent infringement suits, namely Lewis Latimer, that the new and improved home gas-based/central heating system was patented by Alice Parker, that the first home security alarm system, featuring both television and video surveillance, was by Marie Brown, and that the key forerunner to the modern-day elevator was a design by Alexander Miles?

This African and African-American history information here is just the very small tip of a very large iceberg. There’s much more to learn and to share — and it’s American history and world history, not black history!

Therefore, Black History Month should be abolished and should never be recognized or even acknowledged. However, the great contributions of black men and black women in America and throughout the world must rightfully be infused as an essential part of American history and world history.

Based on materials from Phillymag.com, written by Michael Coard. Michael Coard’s radio show, “The Radio Courtroom,” airs at noon on Sundays and Wednesdays. It can be heard locally on WURD 900 AM and on the Internet at 900amwurd.com. Follow @MichaelCoard on Twitter.