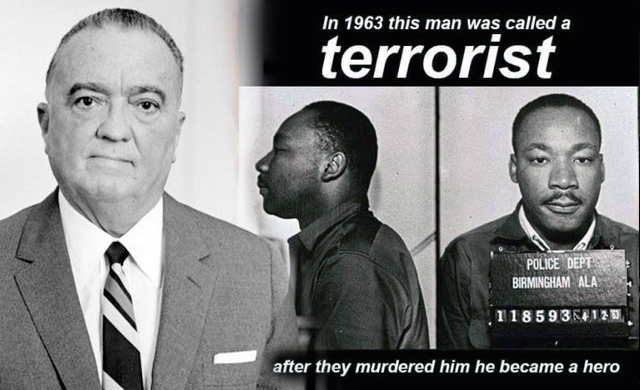 In December, 1999, the half-white half-black jury in a month-long civil trial in Memphis, Tennessee, after hearing almost 70 substantive witnesses, took merely an hour to conclude that Dr. King was executed as the result of a conspiracy that was instigated by then FBI director J. Edgar Hoover.

The conspiring government agencies included the Memphis police, the mafia, and elements of the FBI, CIA, and U.S. military. The twelve jurors reached a unanimous verdict on December 8, 1999, after about an hour of deliberations.

We now know that James Earl Ray wrongfully took the blame for Martin Luther King Jr.’s assassination. It was instead a member of the Memphis Police Department that fired the fatal shot.

The teams were part of the 902nd Military Intelligence Group. Dr. William Pepper came to meet Colonel John Downie, Lyndon Johnson’s former Vietnam briefer was the man in charge of the military part of the plot.

As the official story of the shooting goes, at 5:50 p.m. on April 4, Kyles knocked on the door of room 306 of the Lorraine Motel to let King and the rest of his party know that they were running late for a planned dinner at Kyles’s home.

Kyles then walked about 60 feet down the balcony where he remained even after King came out of the room at about 6 p.m. (Although Kyles has maintained ever since that he spent the last half hour in the room, Pepper has proven otherwise.)

Below is an important statement from Mrs. Coretta Scott King, the wife of legendary civil rights movement leader Martin Luther King jr. that so many of our youth are not aware of. Download Complete Family Press Conference (PDF) 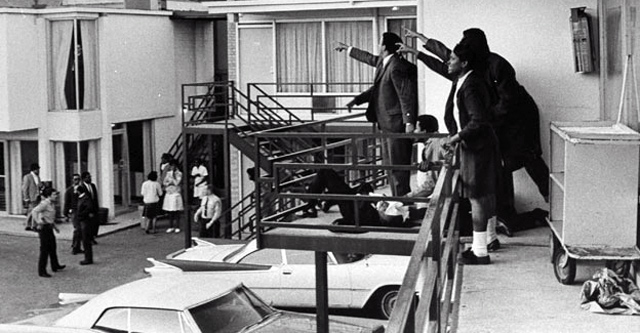 Photo: Joseph Louw/Time & Life Pictures/Getty Images. Civil rights leader Andrew Young left, and others on the balcony of the Lorraine Motel point in the direction where gunshots came from after the assassination of civil rights leader Martin Luther King Jr. on April 4, 1968.

Coretta Scott King speaks at an Atlanta press conference, on Thursday, December 9, 1999, in reaction to a Memphis civil jury’s verdict:

“There is abundant evidence of a major high level conspiracy in the assassination of my husband, Martin Luther King, Jr. And the civil court’s unanimous verdict has validated our belief. I wholeheartedly applaud the verdict of the jury and I feel that justice has been well served in their deliberations. This verdict is not only a great victory for my family, but also a great victory for America. It is a great victory for truth itself. It is important to know that this was a SWIFT verdict, delivered after about an hour of jury deliberation. The jury was clearly convinced by the extensive evidence that was presented during the trial that, in addition to Mr. Jowers, the conspiracy of the Mafia, local, state and federal government agencies, were deeply involved in the assassination of my husband. The jury also affirmed overwhelming evidence that identified someone else, not James Earl Ray, as the shooter, and that Mr. Ray was set up to take the blame. I want to make it clear that my family has no interest in retribution. Instead, our sole concern has been that the full truth of the assassination has been revealed and adjudicated in a court of law… My husband once said, “The moral arc of the universe is long, but it bends toward justice.” To-day, almost 32 years after my husband and the father of my four children was assassinated, I feel that the jury’s verdict clearly affirms this principle. With this faith, we can begin the 21st century and the new millennium with a new spirit of hope and healing.”

Dr. William Pepper chronicled in detail how a disinformation campaign had featured the collaboration of many mainstream journalists over almost half a century.

And the most stunning revelation in The Plot to Kill King – which some may question because the account is second hand – is that Martin Luther King Jr. was shot at 6:01pm and still alive when he arrived at St. Joseph’s Hospital.

He was actually killed by chief of surgery Dr. Breen Bland, who anyone would think that, as a doctor, would have tried to save his life even though King was badly wounded. Civil Rights leader was pronounced dead at 7:05pm.

The truth about the St Joseph’s Hospital story

The hospital was told to Dr. William Pepper by a man named Johnton Shelby, whose mother, Lula Mae Shelby, had been a surgical aide at St. Joseph’s Hospital that night.

Shelby told Pepper the story of how his mother came home the morning after the shooting (she hadn’t been allowed to go home the night before) and gathered the family together.

He remembers his mother telling them:

“I can’t believe they took his life.”

“Stop working on the nigger and let him die! Now, all of you get out of here, right now. Everybody get out.”

Johnton Shelby says his mother described hearing the sound of the three men sucking up saliva into their mouths and then spitting.

Lula Mae described to her family that she looked over her shoulder as she was leaving the room and saw that the breathing tube had been removed from Martin Luther King and that Dr. Bland was holding a pillow over his head.

NOTE: The book “The Plot to Kill King” contains the entire deposition given by Johnton Shelby to Pepper, so readers can judge for themselves whether they think Shelby is credible – as Pepper believes he is.

A second invaluable source was Ron Adkins, whose father, Russell Adkins Sr., was a local “Dixie Mafia” gangster and conspirator in the planning of the assassination even though he died a year before it took place.

Ron Atkins told Dr. William Pepper he had overheard Dr. Bland, who was his family’s doctor, tell his father that if Martin Luther King did survive the shooting he had to be taken to St. Joseph’s Hospital and nowhere else.

Ron Atkins remembers Dr. Breen Bland saying to his father, ‘If he’s not killed by the shot, just make sure he gets to St. Joseph Hospital, and we’ll make sure that he doesn’t leave.’

Ron Atkins, who was only 16 when the King’s assassination took place, was apparently following his father everywhere in those days, and he was able to recount many details of what happened as the assassination was planned and carried out.

Dr. William Pepper definitely found him credible. He also felt that Atkins was quite disturbed in a lot of ways by things that went on earlier in his life.

Ron Atkins deposition is also contained in the book, which Dr. William Pepper explains was important so that readers could judge the statements for themselves.

“What I wanted to do was to make sure that the entire deposition of these critical moments and this critical information was there so that one could go and read the depositions and see that I was being accurate,”

Besides describing what Ron Atkins heard Dr. Breen Bland tells his father, he described the many visits made to Russell Sr. by Clyde Tolson, J. Edgar Hoover’s right-hand man.

Known to Ron as “Uncle Clyde,” the high-level FBI official often delivered cash to the elder Adkins for jobs he and his associates would carry out on behalf of Hoover. Among those the younger Adkins said were paid to supply information about the activities of Martin Luther King, Samuel “Billy” Kyles and Jesse Jackson.

Important video interview with Dr. William Pepper, a former human rights lawyer and author of “The Plot To Kill King: The Truth Behind the Assassination of Martin Luther King, Jr.” by Dan Dicks of PressForTruth.ca on March 10, 2018, in New York.

For one bright moment back in the late 1960s, we actually believed that we could change our country. We had identified the enemy. We saw it up close, we had its measure, and we were very hopeful that we would prevail. The enemy was hollow where we had substance. All of that substance was destroyed by an assassin’s bullet.

SOURCE: Based on material compiled from GlobalResearch.ca and The King Center (thekingcenter.org)