The Lowry Band Of North Carolina and Henry Berry Lowry 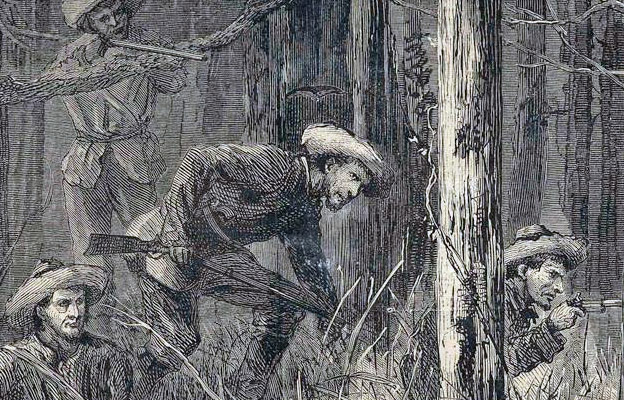 (The Lowry Band) People of African and Native American descent have played a prominent part in North Carolina history since survivors of the Lost Colony of Roanoke in 1585 found a home among the nearby Lumbee Indians and then took in runaway slaves from later British colonies.

One band of these well-armed mixed-bloods lived in Robeson County, North Carolina, next to South Carolina, under the name of the Lowry Band and commanded by Henry Berry Lowry, himself a mixture of the three races.

They also lived under the noses of slaveholders who feared their presence would attract more runaways (and did). During the Civil War, the Lowry Band clashed often with the state’s Confederate Home Guards. This police unit tried to seize and force Lowry’s men to build Confederate fortifications.

The Lowry Band, in turn, had no use for the Confederacy, forced labor and that some of their kinfolks were still enslaved by Confederates. The Home Guard also claimed Lowry’s men hid guns, stole meat, robbed from the rich, and wanted to overthrow slavery and the Confederacy.

Lowrey’s men had no intention of being made slaves again, they welcomed, recruited and armed fleeing Union prisoners, African American runaways and Confederate deserters.

During the Civil War, the Lowry Band and the Home Guards fought their own civil war. Then the Union Army reached North Carolina! In late 1864 US General, William T. Sherman decided he could end the war if he sliced the Confederacy in half by cutting through Georgia to its capitol at Atlanta, and then even further to Savannah on the Atlantic Ocean.

With 60,000 men and no contact with supply lines — but aided by slave runaways — his soldiers lived off the land, as they cut a path of grim desolation. Then from Savannah, the men marched northward into South Carolina aiming to crush this fountainhead of the secession movement.

Then Sherman’s army headed toward North Carolina and Virginia to cut another devastating swathe through the Confederacy. They reached Robeson County, on March 9th only to be stopped by torrential rain, muddy roads, and swollen creeks.

They could not move or knew where to move. Suddenly out of the downpour appeared a dark, grizzled guerilla force offering to help. Sherman called his saviors “Lumbees” because he knew were descended from Jamestown’s first English colonists who had mixed with slave runways and Lumbee Indians.

But this was “The Lowry Band” under Henry Berry Lowry and by now mortal enemies of the Confederacy and slavery. They led Sherman’s army through the torrential rain and treacherous swamps. Sherman thanked the men for “the damnedest marching I ever saw.”

Then with General Grant from the North, from the south Sherman went on to bring the Civil War to an end. On February 22nd Union troops including African Americans liberated Wilmington. On April 9th Lee surrendered to Grant, and two weeks later on April 26, Confederate General Joseph Johnston surrendered to Sherman in North Carolina.

Whether you call them Lumbees or the Lowry Band of Black Indians, these fighters had done their part to end the war, defeat the Confederacy and help abolish slavery in the United States.

“If you believe people have no history worth mentioning, it’s easy to believe they have no humanity worth defending”