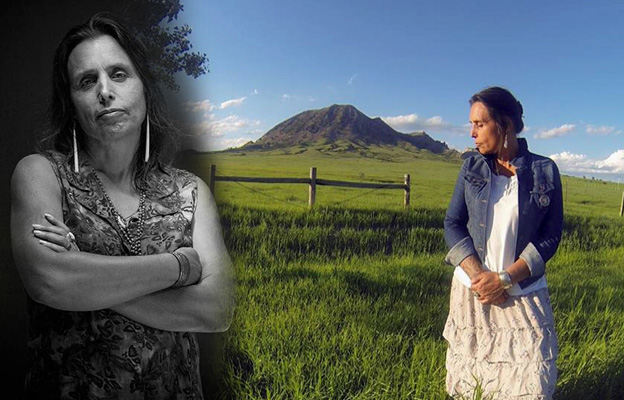 Winona LaDuke is an internationally acclaimed Anishinaabekwe (Ojibwe) activist, environmentalist, economist, author, and orator. A graduate of Harvard & Antioch with advanced degrees in rural economic development, Winona LaDuke has devoted her life to protecting the lands & lifeways of Native communities.

Winona LaDuke is an enrolled member of the Mississippi Band Anishinaabeg who lives and works on the White Earth Reservations and is the mother of three children.

She is also the Executive Director of Honor the Earth, where she works on a national level to advocate, raise public support, and create funding for frontline native environmental groups. In 1994, Winona was nominated by Time magazine as one of America’s fifty most promising leaders under forty years of age.

Read also: The Black Hills Are Not For Sale. Honor the Treaties!

Winona LaDuke has been awarded the Thomas Merton Award in 1996, the BIHA Community Service Award in 1997, the Ann Bancroft Award for Women’s Leadership Fellowship, and the Reebok Human Rights Award, with which she began the White Earth Land Recovery Project.

“The only compensation for land is land.”

In the interview above, Winona LaDuke speaks passionately about the Federal Government’s refusal to return the land to Indigenous Americans.

White Earth Land Recovery Project is a reservation-based non-profit devoted to restoring the land-base and culture of the White Earth Anishinaabeg. In 1998, Ms. Magazine named her Woman of the Year for her work with Honor the Earth.

In 1996 and 2000, she ran for vice president as the nominee of the Green Party of the United States, on a ticket headed by Ralph Nader. A graduate of Harvard and Antioch Universities, Winona LaDuke has written extensively on Native American Indian and Environmental issues.

She is a former board member of Greenpeace USA and serves, as co-chair of the Indigenous Women‘s Network, a North American and Pacific Indigenous women‘s organization.

Author of now six books, including “The Militarization of Indian Country” (2011), “Recovering the Sacred: the Power of Naming and Claiming” (2005), the non-fiction book “All Our Relations: Native Struggles for Land and Life” (1999, South End Press), and a novel – Last Standing Woman (1997, Voyager Press). In 2007, Winona LaDuke was inducted into the National Women’s Hall of Fame.

“Someone needs to explain to me why wanting clean drinking water makes you an activist, and why proposing to destroy water with chemical warfare doesn’t make a corporation a terrorist.”

Honor the Earth is a Native-led organization, established by Winona LaDuke and Indigo Girls Amy Ray and Emily Saliers, in 1993 to address the two primary needs of the Native environmental movement: the need to break the geographic and political isolation of Native communities and the need to increase financial resources for organizing and change.

“We don’t want a bigger piece of the pie. We want a different pie.”

Read also: The Black Hills Are Not For Sale. Honor the Treaties!

This model is based on strategic analysis of what is needed to forge change in Indian country, and it is based deep in our communities, histories, and long term struggles to protect the earth.

SOURCE: Based on materials from Honor The Earth, White Earth Land Recovery Project