We applaud Ashley Callingbull stance on important issues that directly affect Indigenous People across North America, including undoing racism. She gets political, and she doesn’t care if you don’t like it. The 2015 Mrs. Universe is a First Nations Activist for First Nations Rights and environmental causes in Canada and hardly you ‘typical beauty queen’.

“Really? People think I’m too political for my first day as Mrs. Universe. Did you really think I was going to just sit there and look pretty? Definitely not. I have a title, a platform and a voice to make change and bring awareness to First Nations issues in Canada. I’m getting all this media attention and I’m going to use it to the best of my ability. I’m not your typical beauty queen. Look out… I have a voice for change and I’m going to use it!”

Ashley Callingbull also known Burnham is a Cree First Nations woman from the Enoch Cree Nation in the province of Alberta, Canada. She is very devoted to her culture and people, and takes pride in her Native Cree heritage, and has shown this through her volunteer work with community elders and aboriginal youth.

“People think pageant girls are just tall, beautiful, and have nothing to say. I have a lot to say.”

Ashley is also an international motivational speaker and role model for many educational institutions, workshops, conferences and award ceremonies. She is a professionally trained dancer in tap, ballet, jazz, pointe and performed in the Nutcracker. By the time Ashley reached 10 years old; she had consecutively won all Enoch’s princess crowns.

The first First Nations woman to win Mrs Universe, Ashley Callingbull Burham, spoke out against the Tory government in Canada:

“We are being treated like terrorists if we are fighting for our land and our water.” 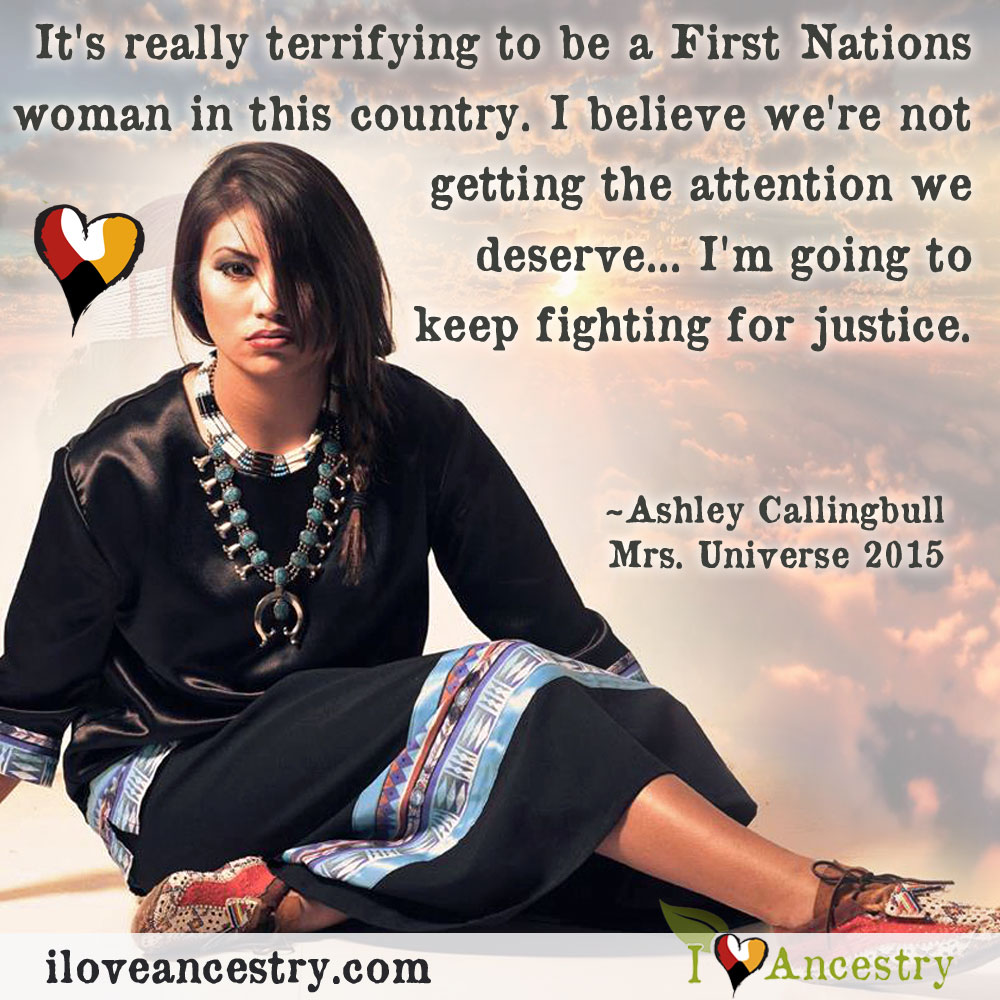 “It’s really terrifying to be a First Nations woman in this Country. I believe we’re not getting the attention we deserve… I’m going to keep fighting for justice.”

Ashley has spoken at Harvard University, Boston as the keynote speaker for an All-Ivy Native Council, TED Talks, and WE Day. Ashley’s hard work and charity work was recognized as she received the Role Model Award at the Dreamcatcher Gala and she also received the Top 20 Under 30 Award in Canada.

Ashley’s interest in acting led her to starring in a commercial for The Hudson Bay, and has appeared in television mini-series, acted in countless stage performances and has lent her voice for cartoons. She appears in Blackstone, a television show that airs on APTN, Showcase, Maori Television in New Zealand and Hulu Television in the United States. Ashley is also featured in CBC’s 8th Fire Series and the Catch The Dream Series.

Ashley is also a spokesperson and model for the Nike N7 organization.

SOURCE: Based on materials from Ashley Callingbull’s website. Ashley is a Canadian Activist for First Nations Rights and environmental causes in Canada.