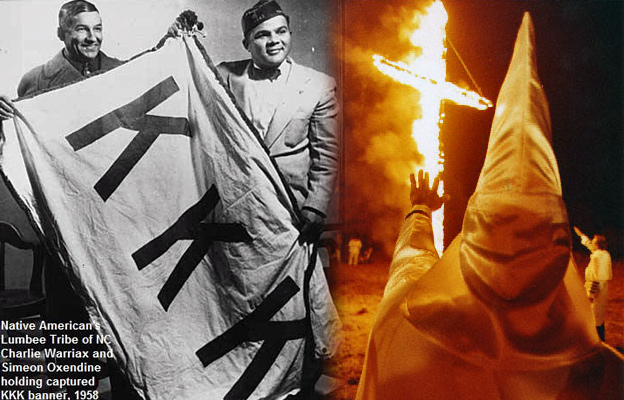 The Lumbee Tribe made history January 18, 1958 with the Battle of Hayes Pond.

This was the night the Lumbee tribe defeated the Ku klux Klan with the Battle of Hayes Pond, captured their hate-filled banner, and in doing so stopped Klan activity in Robeson County, North Carolina.

By the mid-1950s the Civil Rights Movement was gaining momentum and the Ku Klux Klan decided they had to fight back. Their campaign of American terrorism swept through many of the southern states but largely fell flat in North Carolina.

James W. “Catfish” Cole, the Grand Dragon of the Ku Klux Klan in South Carolina, decided he was going to change that. In the days leading up to the Hayes Pond rally, Cole had come through town with a loudspeaker on his flat-bed truck, preaching his vile hate for everyone to hear.

Cole wasn’t actually from the county and neither were many of his followers. So it was probably a surprise to Cole when Robeson County sheriff Malcolm McLeod visited Cole in his South Carolina home and “told him that his life would be in danger if he came to Maxton and made the same speech he’d been making.” Cole’s reply:

“It sounds like you don’t know how to handle your people. We’re going to come show you.”

Pleased with the growing hatred he was feeding, Cole called for a massive Klan rally of 5,000 members on January 18, 1958, at Hayes Pond. Instead of cowering, the Lumbee tribe had assembled about a mile away.

Small groups of armed Lumbee Indians, about 500 in total, fanned out across the highway and began to encircle the Klansmen. As the song finished and the rally was to begin, Lumbee Sanford Locklear walked up to Cole and began arguing with him.

Words became shoves and tempers rose. Lumbee Neill Lowery had seen enough. He leveled his shotgun at his hip and blasted out the floodlight. The field went dark.

The Lumbees began firing into the air and yelling their war hoops as they charged the field. The nerve of the Klansmen broke and they fell into a complete panic. The Klansmen dropped their guns and scrambled for their cars.

Some had brought their wives and children with them, who wailed in fear as dark-faced Lumbee milled around their cars and pointed flashlights at them. James Cole, the Grand Dragon himself, was in such a panic that he ran into a nearby swamp, abandoning his wife and “white womanhood” in the process.

Cole’s wife, Carolyn, also in a panic, drove her car into a ditch. After a few minutes, several Lumbee helped push her car back onto the road.

“The only thing they left behind was their stuff and their families,” stated Lumbee Ray Little Turtle.

The state patrol, led by Sheriff McLeod, had set up camp about a mile away. McLeod intentionally waited until the shooting started because he didn’t want to be accused of defending the Klan by showing up early.

He organized his men to search the bushes for Klansmen who were hiding and then escorted them out of the county. Afterward, the police tossed a couple of tear-gas grenades into the field to disperse the crowd. The battle of Hayes Pond was over.

Four people suffered minor injuries from falling shotgun pellets. One Klansman was arrested for public drunkenness. One Klansman cursed a Lumbee who was blocking the road. The Lumbee punched him through the open car window.

The victorious Lumbee tribe had collected the robes and banners that the Klansmen had left behind. They then held their own “Klan parade” through the town of Maxton. Some rode in cars, others marched. The parade ended with a bonfire of Klan material in Pembroke.

The large, captured Klan banner was taken back to the VFW convention in Charlotte, where members of the Lumbee tribe posed in front of it for pictures.

Moral of Story: Native UNITY can stomp out racism and oppression in our land.

SOURCE: Written and Compiled by Sonya Braxton of Paper Genocide of American Indians based on materials from dailykos.com.