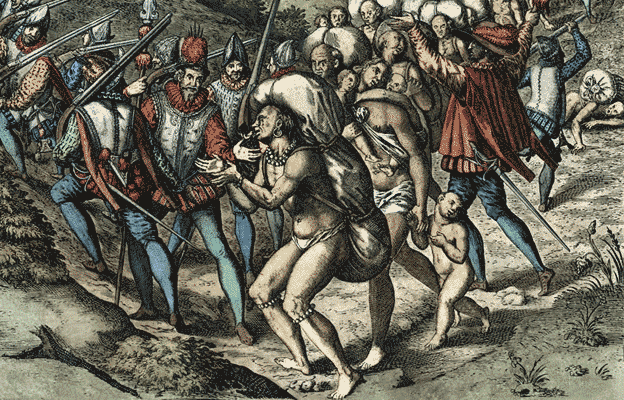 Native American slavery, ever heard of it? It is not known how many Indians were enslaved by the Europeans, but they certainly numbered in the tens of thousands.

Because of the higher transportation costs of bringing blacks from Africa, whites in the northern colonies sometimes preferred Indian slaves, especially Indian women and children, to blacks. Carolina actually exported as many or even more Indian slaves than it imported enslaved Africans prior to 1720.

The usual exchange rate of captive Indians for enslaved Africans was two or three Indians to one African. *Until late in the 18th century Indian slaves worked on English plantations alongside enslaved Africans and even, occasionally, white indentured servants up until the end of slavery in America in the year 1865.

Women and children frequently were used as menial laborers or domestic servants. Slavery existed for Natives held in captivity of slave owners that used words like Negro, or Mulatto to keep Native American Indians and also Afro Native Americans in servitude by falsely claiming they were not Indian.

For the fortunate ones that could prove they were indeed Indian they were set free, but others remained in slavery. Anyone born to a slave woman be she Native American Indian, Black African, or Afro Native American inherits slavery.

Many of our Native people are now learning about this suppressed part of history that is not openly discussed in any national forum be it TV, film, or the schools in our land. Slavery hurt all of us, be us Native American Indians, Afro Native Americans, or Africans.

The propaganda sold to the public to divide Indians and Black folks is that our Native people had slaves for servitude only. Many of our American Indian, Mixed Blood Indians and even Free Blacks rescued “by purchase” Indians, Mixed Bloods, and Blacks who were family members, and the only way to set them free was to buy their freedom for them.

*Dr. King Schultz: After this Brittle business is behind us, you’ll be a free man, with a horse, seventy-five dollars in your back pocket. What’s your plan after that?

*Django: Find my wife, and buy her freedom.

So never forget our combined history of slavery in America be any of us American Indian, Black, or Black Indian…this history should be the tie that binds us in unity, and not divide us in “The Struggle”.

Also as American Indian people, we should use ALL “opportunity” available to us in our land as our road to sovereignty because we can make a real difference in our land.

SOURCE:  Written and Compiled by Sonya Braxton about Native American Slavery based on materials from “Slavery and Native Americans in British North America and the United States: 1600 to 1865” by Tony Seybert