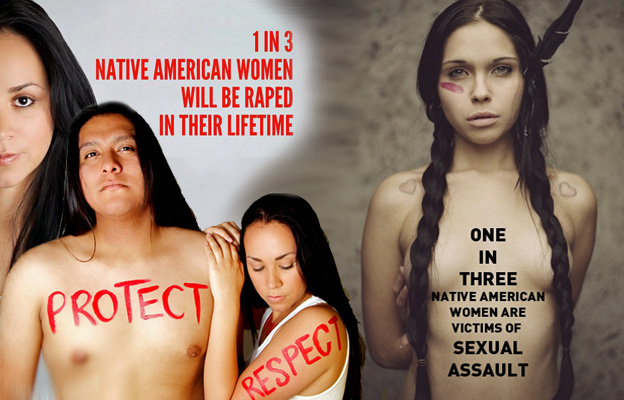 Well, the fact remains that this is something our women have been burdened with ever since the first Europeans came to our land. Statistics show that this problem in our land is just as bad today as it was hundreds of years ago.

This is a community issue that we as a community have to acknowledge. Hyper-sexualization of Indigenous American women is basically the cultural appropriation of our bodies by a ruthless European based patriarchal society that is dominant in our land.

Domestic Violence by Race and Ethnicity, Native Americans According to the Southwest Center for Law and Policy: Native Americans are victims of rape or sexual assault at more than double the rate of other racial groups.

“They treat Mother Earth like they treat women… They think they can own us, buy us, sell us, trade us, rent us, poison us, rape us, destroy us, use us as entertainment and kill us. I’m happy to see that we are talking about the level of violence that is occurring against Mother Earth because it equates to us [women]. What happens to her happens to us… We are the creators of life. We carry that water that creates life just as Mother Earth carries the water that maintains our life.”

“I am Not a Costume!” by Noel Altaha

Message from Noel Altaha White AKA Noel Genevieve There is always a dance between the oppressed and their oppressors, in this case there is a dance between Native Americans and Americans of this country. Natives who exist in both worlds have the honor and responsibility to continue educating Native and non-Natives on the historical trauma and unresolved grief from our painful past.The painful relationship we (Native and non-Native) are engaged in can only heal when Respect enters the scene. I am challenging everyone to ponder on this concept and even commit to the idea of respecting another’s culture.In this case, dressing in a costume that mocks the culture your ancestors oppressed is plain disrespectful. I understand you may admire Natives and children may see Natives as magical beings, it still puts Natives in a positions to not own who they are, it is dis-empowering them when you label them. It is dis-empowering Native women when you create nostaglia or eroticize them.It hurts when you sexualize them and make it okay to dress as an “Indian Princess”. Let us define who we are in our own way. There are 500+ Indigenous tribes in the US and we deserve the right to be left alone on the national holiday. If you are non-Native American to support the cause: as a consumer you have the power in your pocket.Don’t buy the costumes. Don’t make it about race, make it about respect. There is also to suggest micro-aggressions have a lot of negative impacts. Micro-aggressions are the everyday verbal, nonverbal, and environmental slights, snubs, or insults, whether intentional or unintentional, which communicate hostile, derogatory, or negative messages to target persons based solely upon their marginalized group membership (Wing, 2013).According to Wing, in many cases, these hidden messages may invalidate the group identity, demean them on a personal or group level, communicate they are lesser human beings, suggest they do not belong with the majority group, threaten and intimidate, or relegate them to inferior status and treatment. (If you get a chance, the research is fascinating.)Anyway, remember that progress is key. When we give into the idea of making it okay to dress as another’s culture for one night, We are disrespecting ourselves and the advances we have made since the initial colonial contact, let’s not make one step forward, three steps backward. When we dress in a costume mocking another’s regalia we are also disrespecting Native American ancestors and those who had unending patience, wisdom, and compassion towards the ignorant. Lastly, I do not speak nor do I ever intend to speak on behalf of all Native Americans. I do, however, speak for myself as a Native American and proud Apache woman when I say it is my honor and responsibility to stand up and educate others when I see disrespect occuring to a healing people. I am one person demanding a my generation to be more engaged, enlightened, and more compassionate and respectful towards the planet and to ourselves. We are all in this together after all. Trick-or-Treat and I hope everyone has a safe and happy Halloween. This message is for my generation and for the next three generations to come. Thank you for your time. Respectfully, Noel Altaha White Mountain Apache TribeStay informed about our work. Subscribe to I Love Ancestry eNews: http://eepurl.com/CLJan – Our strength lies in collective action. Join Us NOW!>>—>

“Dressing in a costume that mocks the culture your ancestors oppressed is plain disrespectful. I understand you may admire Natives and children may see Natives as magical beings, it still puts Natives in a position to not own who we are, it is dis-empowering us when you label them. It is dis-empowering Native women when you create nostalgia or eroticize us.”

The European patriarchal mind-set has been in our land for over 522 years. Every year there is more exploitation and appropriating of the female Indigenous American image, specifically during the Halloween and Thanksgiving European based holidays that are celebrated every year by Americans in our land.

If we want to change it begins at home and in our community. We have to bring this issue to the forefront because it is an issue that affects our women on a daily basis through cultural appropriation and exploitation of the Female Indigenous image.

Men have been brainwashed by European society in our land to view women as objects with false views of a hyper-sexualized Native female, so to speak.

Before the Europeans came to our land our men worshiped the ground we walked on because they viewed our women as sacred because we are mothers of mother earth, we give birth to Nations.

We as Native women must demand respect and respect ourselves. Women are Sacred.

SOURCE: Based on materials about cultural appropriation from the American Bar Association and video from Noel Altaha.