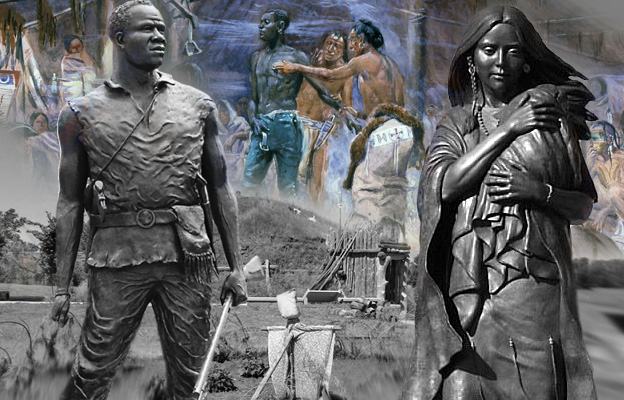 Sacagewa and York from Black Indians: A Hidden Heritage by William Loren Katz

Sacagewa and York:  1803 when President Thomas Jefferson purchased the Louisiana Territory from France, he doubled the size of the new United States of America It also gave two Americans — considered unneeded inferior or criminal — a unique opportunity to serve as US ambassadors of goodwill.

Sacajawea, a brilliant Shoshone woman, carrying her newly-born boy, and York, a tall, muscular, fast-thinking enslaved African, worked together to make the famous 44-member Lewis and Clark Expedition the success Jefferson hoped for.

To survey the new land that stretched from the Mississippi to the Pacific Ocean, Jefferson asked his two good friends, Merriweather Lewis and William Clark to explore the region’s resources, trade possibilities — and above all to establish peaceful relations with its two dozen Native American Indian nations.

York, 33 was born into Virginia slavery in the Clark family. He grew up with William Clark also 33 and the two earlier explored together. In l799 when William inherited the family estate, he now owned his childhood companion. By this time York was an imposing six feet in height and over 200 pounds — in an age when most men were under five foot six.

In St. Louis as the explorers began to train, York picked up French and Indian words. Sacagewa, her child and French husband soon joined the party. For the next two and a half years York, Sacajawea and her husband translated Native American Indian languages into French and English. Sacajawea and York did more. They were able to convince one Native American Indian Nation after another that the 44 came in peace and friendship, especially since Sacajawea was a Shoshone carrying her infant.

York also became one of the party’s best hunters, fishermen, and scouts. By the last year of the journey, he was given the assignment of trading with the Indians for the expedition’s food. His diplomacy rested on more than his considerable frontier skills, command of language and smiling goodwill.

York was incredibly fast on his feet and utilized his agility when negotiating. Many Native American Indians had never seen an African American of his size and strength. Clark’s diary recorded how the Arikara “all flocked around him and examined him from top to toe.” York responded by dancing, showing “his powers of strength” and telling the astonished Arikara that he had once been a “wild animal.” His leaping agility won new friends for the expedition.

All the way to the Pacific coast, Clark wrote, Indian women were “very fond” of York. Like others in the expedition, York had “wives” in the Indian villages. 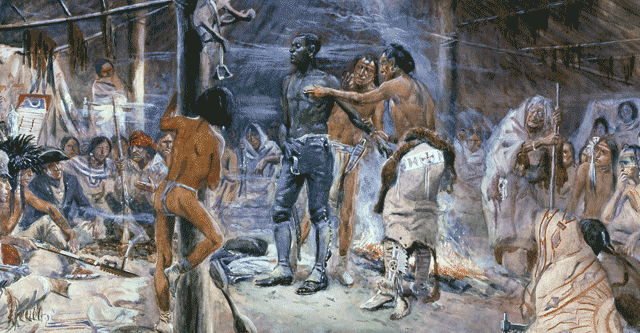 Among the Mandan Indians on the Upper Missouri, York leaped and danced his way into hearts, startling people that so “large a man should be so active” and agile. Fascinated Mandans tried to rub York’s black skin with a wet finger to see if the color would come off. Artist Charles Russell captured this moment in a famous painting.

The Shoshone, Nez Perce and Nations along the Columbia river found York fascinating. York’s diplomatic skills turned this fascination into a bargaining tool, as he became a skilled negotiator.

By the end of l805, Sacagewa and York had earned equal voting privileges in the expedition. Sacajawea and York had traveled far from the lowly places white society had assigned them.

One Flathead Indian explained how his people saw York:
Those who had been brave and fearless, the victorious ones in battle, painted themselves in charcoal. So the black man, they thought, had been the bravest in the party.

Clark York returned to Kentucky and dull routine. But when Clark was appointed Governor of the Missouri Territory and Director of Indian Affairs, York went with him. He hired out near Louisville so he could be near his wife, who worked for a white family.

In time Clark liberated York and gave him a wagon and six horses. He ran a transportation business between Nashville and Richmond before he finally died of cholera.