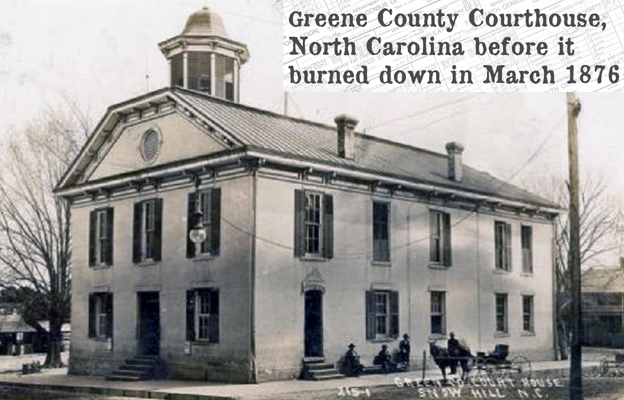 Why were there so many courthouse fires in America in the 18th and 19th centuries?

Paper genocide: Those “oh so frequent” county courthouse fires in buildings that seem to have suffered from bouts of spontaneous combustion. The same government buildings that contained land deeds, marriage, birth record, and anything on paper that identifies us legally as American Indians in our land which counties claim have been destroyed. North Carolina has had its share of courthouse fires.

Highlighted in this article is the town of Snow Hill, North Carolina which is located in Greene County, formally Dobbs County. Snow Hill is now built on Tuscarora Territory or the land of my Ancestors. Snow Hill, formally known as Neoheroka or Neyuheru:ke’ in Tuscarora is the stronghold constructed by the Tuscarora during the Tuscarora War of 1711-1715.

We Tuscarora are still great in numbers in North Carolina through court records and birth certificates now state otherwise due to paper genocide.

“GREENE COURT.- This tribunal is in session at Snow Hill, where we spent a few hours among our friends on Tuesday. The court is being held in the old Academy building.

Judge Seymour presides. Among the many legal gentlemen present we noticed the familiar faces of Messrs W. T. Dortch, A. K. Smedes, W. T. Faircloth, E. A. Thompson, John F. Wooten, Swift Galloway, Col. Yellowly, and others. There are about sixty cases on the criminal docket, and probably the same number on the civil docket.

It is thought that the court will adjourn by Saturday. The burning of the courthouse and destruction of papers may impede the progress of the court somewhat, but no trouble is anticipated.

The destruction of county Records will necessarily involve much litigation. It is hoped that the Legislature will afford all possibly [sic] relief.

The county Register has already ordered a new set of Record books and will shortly commence the work of replacing his Records.

The origin of the fire is still a matter of doubt, with many. There are some who firmly adhere to the opinion that the fire was the result of *incendiarism, while others think it originated from the stove in the Registers office.

Efforts will doubtless be made soon for rebuilding the courthouse. It is thought that $ 4,000 will rebuild the present walls of brick, while someplace the estimate at less than this.

We were surprised to hear the question of removing the courthouse discussed with so much earnestness.

There are some who would like Hookerton to be the county seat, while a number of moneyed gentlemen of the Speight’s Bridge section declare positive that if ever the courthouse is rebuilt at Snow Hill it must be done at the individual expense of the citizens and friends of that town, without expense to the county.

In support of this declaration Col. Owen W. Jones, offers to build a courthouse for the county on his land (which his friends claim is about the center of the county) at his own expense unless the rebuilding at Snow Hill can be effected without expense to the tax-payers.

Of course, the question of removal would have to be decided by a vote of the people, and it is hardly probable [sic] that a removal will be consented to.

At any rate, the proposition of Col. Owens may save the county the expense of rebuilding. As is everywhere the case our Greene county friends complain of stringency in money matters.”

Many of those courthouse fires were set by courthouse clerks themselves. Especially in North Carolina, South Carolina, and Virginia which have some of the oldest colony records in America.

Many records were also stolen from the courts by court clerks. I don’t believe our Native American Indian people burned down courthouses to destroy their own records. The records were either stolen or destroyed by whites to cover up Indian land thefts by whites.

Many Indian records that were not burned were salvaged after the fires and held by families of the courthouse officials. Some say those records exist to this day under lock and key within those counties. Could you imagine the courthouse fire numbers if we took a look at each state’s record of courthouse fires?

SOURCE:  Written and Compiled by Sonya Braxton of Paper Genocide in America based on materials from Diane Siniard, county coordinator for Sampson County, NC and USGenWeb Archives by Mike Edge