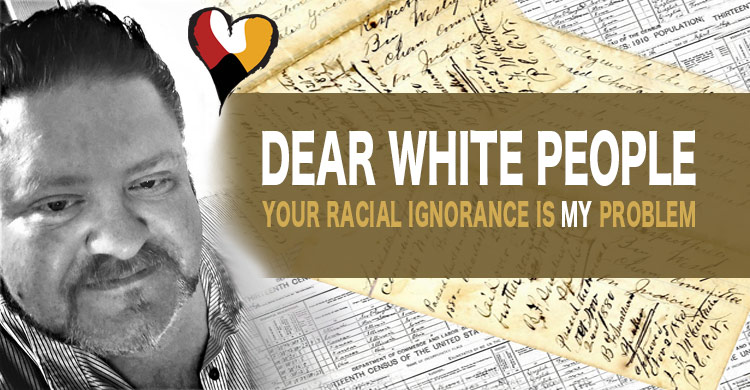 Dixon White: Our society’s collective consciousness is much like Trump’s, so invested in the false narratives of bigotry and greed that the truth is only referred to as “fake”.

“Throughout history, it has been the inaction of those who could have acted; the indifference of those who should have known better; the silence of the voice of justice when it mattered most; that has made it possible for evil to triumph.”

So if you’re white and tired of hearing about our culture and system of white supremacy you should try living under it for 500 f*****g years.

So get up off your ass and fix this mess our people made or deal with the consequences.

White privilege does not mean white people don’t have problems. It means there are certain areas in life where we white folks have fewer obstacles and many more benefits than people of color. Yes, we all struggle in life no matter what shade or background.

But if you have white skin, you and I are living in a country that was designed exclusively for white folks. As a white race we reap benefits, socially, politically, institutionally, economically, and psychologically.

Yes, white supremacy is the most openly neglected evil of our time. The reality is that American/European white culture and systems created two holocausts, one being a black holocaust and the other being an Indigenous holocaust. And these holocausts are still being played out today.

I have learned that as white folks we do not live with the reality of racial injustice and abuse that people of color do. We often don’t see people of color because we don’t have to or need to; our white supremacist culture and society is set up that way.

We allow ourselves to be well insulated from the realities of what our white supremacist society is doing, racial denial is white America’s greatest past time. Too many of us are willfully ignorant of racism and racially apathetic because of the benefits and privileges of not having to live and deal with racial persecution and injustice.

Obviously, that privilege gives us many benefits and advantages in our white supremacist structured society that we tend to cling to out of the fear and greed of losing it.

We, white folks, have to each face the hard truth that our country and people created a great evil called white supremacy out of the love of money and power so that our white race could thrive at the abuse, expense, exploitation, denigration, and detriment of people of color.

Where do YOU draw the line?

For example in America, the black president has to be literally perfect in every way. He must possess the perfect poise, class, education, family, humility, ethics, charm, professionalism, he must be impartial, transparent, objective, peace-loving, unbiased, he must be meek, articulate, scandal-free, well-spoken, and a unifier of all peoples.

But the white president can be overtly racist, sexist, xenophobic, elitist, corrupt, a pervert, thin-skinned, narcissistic, a traitor to his country, a divider, illiterate, immoral, a rapist, rude, uncouth, unbalanced, classless, ignorant as hell, a womanizer, and is free to insult anyone and everyone as he chooses while all along having 100 scandals following him around at any given time.

And to top it off even as perfect as our black president was, he still was the most disrespected president in American history.

Did many white folks react to a black president with racism? Yes. Are many white racist feeling emboldened by a white supremacist president? Yes. But don’t get it twisted President Obama and Don Diablo Trump didn’t create white folk’s racism, it’s already been here for over 500 years.

It is way past time we whites start to take some real racial responsibility. I believe we all need to act morally responsible by clearing out and rejecting our culture of toxic racial apathy, arrogance, denial, and fear in regards to dealing with race.

We have to all look in the mirror and own up to the ubiquitous, endemic, and insidious disease called white supremacy that our culture created and desperately clings to simply out of greed and fear.

As white folks we have been programmed to fear black and brown folks, we know our culture and country did a great evil with slavery and the indigenous holocaust. We know either consciously or unconsciously that people of color have and are oppressed.

For many of us, there is nothing that we white folks fear more than karma coming back to bite us in the ass for this systematic injustice we have dealt people of color. Yes, white folks are scared, and we always have been since the day enslaved Africans were set free.

Most bully’s ultimate fear is that their victims will someday bully them back, white America is no different. So in response to this fear and insecurity, we created lynchings, the trail of tears, reservations, Jim Crow, redlining, and now mass incarceration (too many to list them all). But the truth is if people of color actually wanted to hurt white folks in some sort of payback it would have already happened.

Today these fears are often fueled by our whitewashed revisionist education and our white biased media. These fears then get play out culturally in many various ways. One of the ways this sort of racial psychosis acts out is the never-ending maintenance of the lies and propaganda of racism.

We have largely become a nation of white racial apologists. Modern racism often operates in 3D, which is defense, denial, and delusion. We regularly will put up ridiculous defenses and create powerful blinders to racism.

We even embrace colorblindness as a means of avoidance and the notion of not talking about racism as a means to hide and run from its reality. Our silence, disbelief, dismissal, defense, denial, and delusion is racism’s greatest support system and its fuel.

So white folks when it comes to our system and culture of white supremacy, which d-word are you best at? Being a dick, being willfully delusional, dismissing it, defending it, denying it, deflecting it, or dismantling it? 500 years is a little long without a moral compass, don’t ya think?

Many white folks today still have trouble coping, facing, or admitting that white supremacy is a reality in our culture and will often turn to fantasize that people of color suffer from their own racial supremacist ideals, this is called white racial projecting and deflecting.

One of the first lessons Black and Brown folks learn is why it’s wrong to prejudge, stereotype, hate, and discriminate based on skin color. People of color learn this lesson early in life, often without choice.

It’s simply impossible to live out lies in peace. To try to live up to the lies of supremacy forces yourself and yours not only into hate and prejudice externally (toward others) but ultimately internal self-hate. You will become prejudice toward your own and your very self.

Your imperfections and inability to operate on a superior level will become magnified of yourself and of those you are supposed to love. You may find that the love of yourself and others is based upon conditions that stem from your faith in prejudice.

You will push others away because of control issues, gross insecurities, and obsessive disorders to the point of personal utter chaos and misery. Throw away your inherited and taught racism and find a more significantly functional and peaceful life.

So is it just and moral to ignore the injustice people of color have to face out of fear or because we are greedy and irrationally scared of losing the benefiting positions we have? I say it’s better for everybody if we live on the side of justice, morality, and truth.

So to do that first we have to see color; to not see people of color is to deny their reality of having to deal with racism. Most of us would not turn a blind eye to murder, rape, theft, domestic abuse or child abuse? So why do we so often turn a blind eye to racism? Because we were indoctrinated, conditioned and taught to, it’s that simple.

White America is and has been under a crisis of racial: entitlement, apathy, denial, narcissism, delusion, privilege, and immorality. White privilege is having encountered “racism” maybe once or twice in your lifetime.

Versus people of color that have no choice but to live in a world that is designed to exalt, cater to, and uplift everything that is white and in almost every way. From the media to entertainment, from justice to education, from travel to shopping, from healthcare to economics, from where they live to where they work, from micro-aggression to overt racism, people of color live in a constant state of bombardment from a twisted system and culture of white supremacy in almost everything, every day, in every moment.

SOURCE: Dixon White is a racial justice activist, performer, filmmaker, and essayist on White Privilege and White Supremacy in America. Follow Dixon White on his Facebook Page entitled The Dixon Post: A News Center For Justice