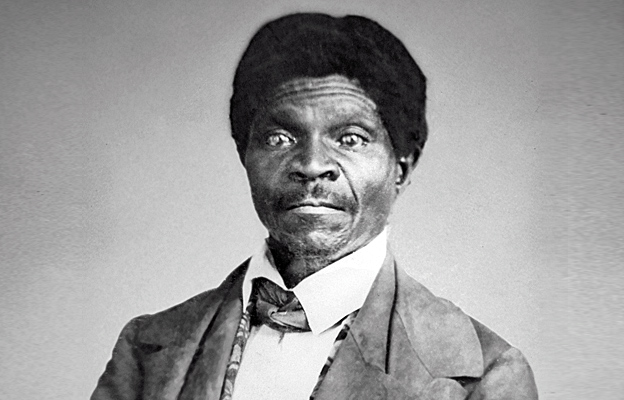 Dred Scott (1799 – 1858) was an enslaved African in the United States who unsuccessfully sued for his freedom and that of his wife and their two daughters in the Dred Scott v. Sandford case of 1857, popularly known as “The Dred Scott Decision.”

Born around 1799, Dred Scott migrated westward with his master, Peter Blow. They traveled from Scott’s home state of Virginia to Alabama and then, in 1830, to St. Louis, Missouri.

Two years later Peter Blow died; Scott was subsequently bought by army surgeon Dr. John Emerson, who later took Scott to the free state of Illinois. In the spring of 1836, after a stay of two and a half years, Emerson moved to a fort in the Wisconsin Territory, taking Scott along.

While there, Dred Scott met and married Harriet Robinson, an enslaved African owned by a local justice of the peace. The ownership of Harriet was transferred to Emerson.

His case was based on the fact that although he and his wife Harriet Scott were enslaved Africans, he had lived with his master Dr. John Emerson in states and territories where slavery was illegal according to both state laws and the Northwest Ordinance of 1787, including Illinois and Minnesota (which was then part of the Wisconsin Territory).

First, he offered to buy his freedom from Mrs. Emerson — then living in St. Louis — for $300. The offer was refused. Scott then sought freedom through the courts.

Dred Scott went to trial in June of 1847, but lost on a technicality — he couldn’t prove that he and Harriet were owned by Emerson’s widow. The following year the Missouri Supreme Court decided that case should be retried.

In an 1850 retrial, the St Louis circuit court ruled that Scott and his family were free. Two years later the Missouri Supreme Court stepped in again, reversing the decision of the lower court. Scott and his lawyers then brought his case to a federal court, the United States Circuit Court in Missouri.

In 1854, the Circuit Court upheld the decision of the Missouri Supreme Court. There was now only one other place to go. Scott appealed his case to the United States Supreme Court.

The United States Supreme Court decided 7–2 against Scott, finding that neither he nor any other person of African ancestry could claim citizenship in the United States, and therefore Scott could not bring suit in federal court under diversity of citizenship rules.

Moreover, Scott’s temporary residence outside Missouri did not bring about his emancipation under the Missouri Compromise, which the court ruled unconstitutional as it would improperly deprive Scott’s owner of his legal property.

The decision of the court was read in March of 1857. Chief Justice Roger B. Taney — a staunch supporter of slavery — wrote the “majority opinion” for the court. It stated that because Dred Scott was black, he was not a citizen and therefore had no right to sue.

While Chief Justice Roger B. Taney had hoped to settle issues related to slavery and Congressional authority by this decision, it aroused outrage and deepened sectional tensions. The decision greatly influenced the nomination of Abraham Lincoln to the Republican Party and his subsequent election, which in turn led to the South’s secession from the Union.

In 1997, Dred and Harriet Scott were inducted into the St. Louis Walk of Fame.

SOURCE: Based on materials from Wikipedia, License CC BY-SA 3.0 and PBS