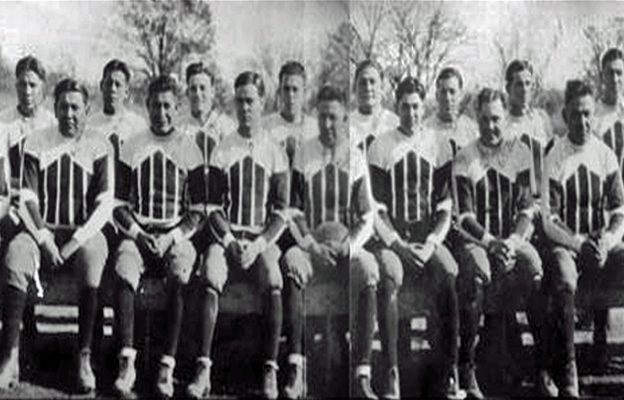 The Hominy Indians were an all-Native American professional football team, meaning The Real Americans, located in Hominy, Oklahoma. The financiers were from Hominy – the players were from all over.

The Hominy Indians on December 26, 1927, defeated the National Football League New York Giants who have titled world champions three weeks prior. The Hominy Indians shot to fame after never being beaten–or tied with–even though they had played in football games all over the country, especially the East Coast.

They had a 26 game winning streak. Watch the documentary film trailer “Playground of the Native Son” that explores the story of the All-Native American Professional Football team.

The National Football Champions that year, the New York Giants, traveled to Pawhuska the day after Christmas to play the famous Hominy Indians, (they were on their way to California) three weeks after winning their national title against the New York Rangers, according to an article “Hail to the real ‘redsk*ns’.

The Hominy Indians Defeated the New York Giants with a 13-6 win.

Urban legends still abound on the Osage reservation about the team founded and financed by two Osage brothers, Ira & Otto Hamilton. Eye-witness accounts passed from one Osage to another said player John Levi could drop-kick the football, which was round and heavier than today’s football, from the 50-yard line through the goalposts back and forth and pass the ball 100 yards.

Another player, Johnnie “Pepper” Martin, went on to play baseball for the St. Louis Cardinals. Jim Thorpe who was voted one of the best athletes in American history was a good friend of John Levi and would watch the Hominy Indians games. The team played its last season in 1935.

“Playground of the Native Son“, a documentary film, is the story of the All-Native American Professional Football team in Oklahoma during the 1920s and 1930s called “The Hominy Indians”. Twenty-two different tribes were represented; some played for one game, some for years.

The Hominy Indians had a 26 game winning streak and had the chance of a lifetime to play against the World Champions, the New York Giants in 1927.