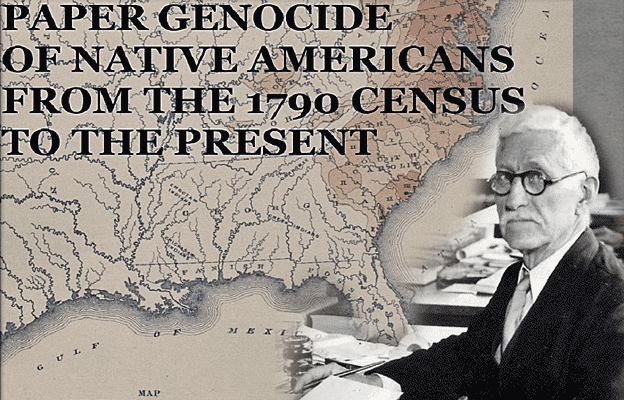 Facts before Walter Plecker Paper Genocide: Since the beginning of the African slave trade in America many Native persons, unfortunately, to the detriment of Native Heritage, were being listed as Black, Mulatto, Negro or just lumped together as “Colored” which did not allow for a distinction between Indigenous and Africans on paper.

In the slavery days being listed as negro was done to our Native people in order for white slave owners to keep an ample supply of enslaved Africans. Many blood Natives have lost a God-given blood Heritage due to slavery in Southern states in which approximately 50,000 or more full-blood Native American Indian men, women, and children alike, were forced by white slave owners to take part in slavery.

With that travesty of race reclassification starting from the first census ever taken in America, Native American Indians were falsely listed on all census records as (Negro), Mustee, Black, Mulatto, or Colored, and sometimes even White.

This was an intentional reclassification which was passed down from generation to generation to the present, even presently entered on many Native American Indians vital records as in birth certificates and social security data.

Walter Plecker of Virginia’s Vital Records began a paper genocide trend that quickly spread throughout the 50 states and continues to this day.

“Walter Ashby Plecker was the first registrar of Virginia’s Bureau of Vital Statistics, which records births, marriages, and deaths. He accepted the job in 1912. For the next 34 years, he led the effort to purify the white race in Virginia by forcing “Indians” and other nonwhites to classify themselves as blacks. It amounted to bureaucratic genocide.”

“With the stroke of a pen, Plecker could write an individual into “Negro” status–and legal and social oblivion. Plecker was only too willing to exercise that power, thus making him a figure of dread to Indians in general, but particularly to the Powhatan remnants in Rockbridge and Amherst counties, until his retirement and subsequent death in 1946.”

“Plecker’s no-nonsense approach made him a celebrity within the eugenics movement, which was increasingly losing support among scientists and becoming a platform for white supremacy.

He spoke around the country, was widely published and wrote to every governor in the nation to urge passage of racial laws just as tough as Virginia’s. He dined at the New York home of Harry H. Laughlin, the nation’s leading eugenics advocate and an unabashed Nazi sympathizer.”

“In 1932, Plecker gave a keynote speech at the Third International Conference on Eugenics in New York. Among those in attendance was Ernst Rudin of Germany who, 11 months later, would help write Hitler’s eugenics law.”

“In 1935, Walter Plecker wrote to Walter Gross, the director of Germany’s Bureau of Human Betterment and Eugenics. He outlined Virginia’s racial purity laws and asked to be put on a mailing list for bulletins from Gross’ department.

Walter Plecker complimented the Third Reich for sterilizing 600 children in Algeria who were born to German women and black men. “I hope this work is complete and not one has been missed,” he wrote. “I sometimes regret that we have not the authority to put some measures in practice in Virginia.”

“Plecker changed and/or destroyed labels on vital records to classify Indians as “colored, mongrel, mulatto,” investigated the pedigrees of racially “suspect” citizens, and provided information to block or void interracial marriages with Whites. He not only did this to Indians but other races as well.”

“Knowledge of this historical development is vitally necessary for those who are searching their Native American Indian heritage to understand why records in the Virginia Bureau of Vital Statistics are incorrect or missing.”

The missing or incorrect birth and death records trend is a common problem in all 50 states due to paper genocide. So many Afro Native American people today are the victim of this paper genocide.

SOURCE: Compiled by Sonya Braxton, creator of Paper Genocide in America based on materials from HamptonRoads.com and No More Indians by Ann Davis, Morgan James Publishing