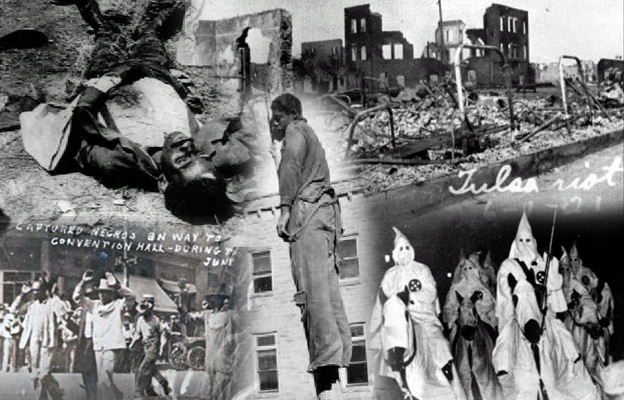 “Black Wall Street”, the Greenwood District of Tulsa, Oklahoma erupted into the most destructive race riot the country has ever experienced (May 31, 1921).

Never Forget the Tulsa race massacre of 1921. Violence broke out after angry mobs of whites called for the lynching of 19-year-old Dick Rowland after he was WRONGLY accused of “assaulting/raping” white elevator attendant Sarah Page. This was American Terrorism on Black Wall Street, Tulsa, Oklahoma.

The first U.S. city attacked from the air

The Greenwood District was home to the wealthiest Black-American community in the United States often referred to as the “Black Wall Street.” During the two days of violence, the Greenwood District was completely destroyed…burned to the ground by a white mob that had been deputized by the sheriff: The U.S Government Local Law Enforcement Representative, leaving more than 10,000 homeless and countless others out of work.

Despite being outnumbered by whites ten to one, on June 1, the National Guard was called in to disarm the crowds of Black Americans whose only crime was to defend themselves against American Terrorism.

Several witnesses reported aerial bombs being dropped on sections of Greenwood. A Massacre! An estimated 300 killed, over 10,000 people displaced overnight as a 42 square block area of their homes and businesses were burned to the ground.

The riot, which began on May 31, 1921, was initiated by an incident that happened the day before. On the morning of May 30, a Black man named Dick Rowland stepped into Tulsa’s Drexel Building to use the restroom.

The elevator operator was a young white girl named Sarah Page. A scream was heard from inside the elevator, and Rowland ran out. While there is no conclusive evidence, it was the general belief of white Tulsans that Rowland attempted to assault Page.

Rowland was arrested, and subsequent headlines in local newspapers stirred up the white and Black populations of Tulsa. Talk of lynching arose among whites, and a crowd of whites and Black Americans gathered outside the courthouse where Rowland was being held on the night of May 31.

A gun discharged while a white man was trying to disarm a Black man, causing the incident to erupt into a much larger racial conflict. By the early morning of June 1, the wholesale burning and pillaging of “Black Wall Street” had begun. Black Americans were greatly outnumbered, and the police were not effective in controlling the riot.

The destruction of the Greenwood community was a result of white mobs setting fire to buildings. As the mob pushed their way through the commercial parts of Greenwood, the residential areas heard and saw the destruction.

Many went to defend their city, also many residents fled. As the Black Americans retreated from their homes, whites immediately looted them. If running from white mobs wasn’t enough, Black Americans were receiving heavy gunfire from above.

Biplanes left over from World War I, were used to shoot our Black American brothers and sisters dropping incendiary bombs on them. The National Guard declared martial law throughout the city at 11:29 am, bringing an end to most violence. The Guard then began rounding up Black Americans for internment.

Most white rioters returned to their homes the night of June 1, while much of Tulsa’s Black population was imprisoned being treated as the “terrorists”.

It took nearly a decade for Tulsa to recover from the physical destruction it endured from the massacre. Despite its significance, both Black and white Tulsans claim the incidence has been “hushed up” and not adequately recognized.

It is scarcely mentioned in history books, especially Oklahoman history books. In 1997, The Tulsa Race Riot Commission was formed to investigate the massacre, and has been working towards getting reparations. Never Forget

The film was donated by the Rev. Anderson’s family through his daughter Pat Sanders. It will be preserved in the museum’s Archives Center, alongside other collections documenting the African American experience, including the extensive collection of materials from the Scurlock photo studio of Washington, D.C. After conservation treatment, the film will be available to researchers and scholars.

“This footage is especially important because it looks at the Black Wall Street community through a personal lens,” said Brent D. Glass, director of the museum. “It is rare because so few African American home movies from that time period exist, and it provides viewers with less-mediated footage and an insight into the interdependence of this community.”