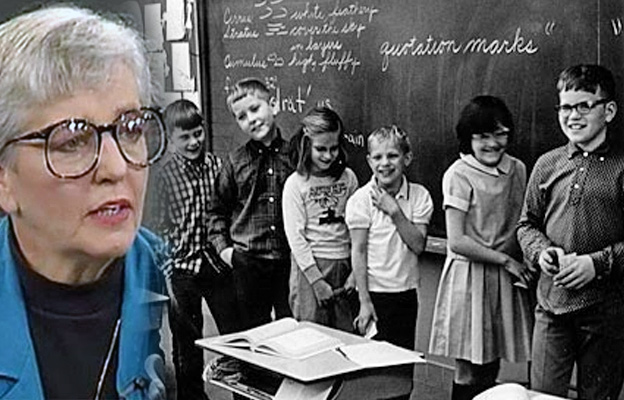 Undoing Racism: Inspiring Jane Elliott is an internationally known educator, inspiring American teacher and anti-racism activist. She created the famous “blue-eyes brown-eyes” exercise, first done with grade school children in the 1960s, and which later became the basis for her career in diversity training.

While there are variations of the story, the exercise Elliott developed for her third-grade class in Riceville, Iowa as a result of Martin Luther King’s assassination. On the evening of April 4, 1968, Jane Elliott turned on her television to find out about the assassination.

One scene she says that she remembers vividly is that of a (white) reporter, with the microphone pointed toward a local black leader asking “When our leader (John F. Kennedy) was killed several years ago, his widow held us together.

Who’s going to control your people?” It was there, in her living room, that she knew she had to devise a plan to educate her students about the negative effects of discrimination.

The following day she had a class discussion about it and about racism in general. But she states “I could see that they weren’t internalizing a thing. They were doing what white people do. When white people sit down to discuss racism what they are experiencing is shared ignorance.”

She states her lesson plan for that day was to learn the Sioux prayer “Oh Great Spirit, keep me from ever judging a man until I have walked a mile in his mocassins” and to give them the opportunity to experience racism.

“I treated them as we treat Hispanics, Chicanos, Latinos, Blacks, Asians, Native Americans, women, people with disabilities, gays and lesbians.”

Jane Elliott Make Her 3rd-Grade Kids
Hate Each Other For The Best Reason Imaginable.
Every child in America should watch this profound video!

The original idea for the exercise came from the novel Mila 18 by Leon Uris, published in 1961, about the Warsaw Ghetto Uprising during World War II. One of the ways they decided who went into the gas chamber, according to the novel and history, was eye color.

Because most of her 8-year-old students had, like Jane Elliott, been born and were being raised in a small town in Iowa and had seen black people only on television, she felt that simply talking about racism would not allow her all-white class to fully comprehend racism’s meaning and effects.

According to Elliott, the first reaction to her exercise (Elliott prefers not to refer it as an “experiment”) was in the teachers’ lounge at lunchtime the day she did the exercise for the first time.

When Elliott explained what she was doing in her class and why and how a number of shy and slow blue-eyed children were benefiting at the expense of the “brown-eyes”, there was disbelief and confusion. One teacher responded, “I thought it was about time somebody shot that son-of-a-bitch.”

Jane Elliott was shocked and dismayed. Later, the compositions that the children wrote about the experience were printed in the Riceville Recorder on page 4 on April 18, 1968, under the headline “How Discrimination Feels”. This story was picked up by the Associated Press.

Because of the AP story, Elliott was invited to appear on Johnny Carson’s Tonight Show. After her telling of the exercise in a short interview segment, audience reaction to her was instant as hundreds of calls came into the show’s switchboard, most of the reaction being negative. An often-quoted letter states “How dare you try this cruel experiment out on white children.”

Elliott has said that the exercise and the publicity that it was getting did not make her popular with some of the local citizens. When Elliott walked into the teacher’s lounge the day after being on the Johnny Carson show, several teachers walked out. Elliott’s own children were taunted or assaulted by other students.

However, not all the reaction was negative. The mail that Elliott received after that television appearance was overwhelmingly positive, particularly from adult persons of color and educators.

Most of the time that she remained in the Riceville school system, she had the support of her administrators and they gave her unpaid leave to pursue outside activities that were related to the exercise and its effects.

As news of her exercise spread, she appeared on more television shows and started to repeat the exercise in professional training days for adults. On December 15, 1970, Jane Elliott provided the experience for educators, physicians, psychiatrists, social workers, and civic leaders at a White House Conference on Children and Youth, staging it for adults, but with the same reactions as those exhibited by her third-grade students, though much more violent.

In 1971, the American Broadcasting Company (ABC) broadcast a documentary about her called “The Eye of the Storm” and made her more nationally known. After that, two books, “A Class Divided” and “A Class Divided: Then and Now” by William Peters were written about her and the exercise.

“A Class Divided” was turned into a PBS Frontline documentary in 1985, and included a reunion of the schoolchildren featured in “The Eye of the Storm”. “Frontline: A Class Divided” is the most requested video on PBS’s televised edition of the exercise was shown in the United Kingdom on 29 October 2009 on Channel 4 entitled The Event: How Racist Are You?

“The Event: How Racist Are You?” by Jane Elliott (2009) was intended, according to the producers in their agreement with Jane Elliott, to create an awareness of the effects of racist behaviors by using UK citizens. In fact, actors who had been seen previously on UK programming and commercials were allowed to participate without Elliott’s knowledge, thereby discrediting the entire presentation.

Among her honors was being featured by Peter Jennings on ABC as “Person of the Week” and textbook editor McGraw-Hill lists her on a timeline of notable educators along with Confucius, Plato, Booker T. Washington, and Maria Montessori. She has been invited to speak at more than 350 colleges and universities. She has also appeared on The Oprah Winfrey Show five times.

Elliott’s exercise has been honored by Kenneth Clark’s description:

“demonstrates that it is possible to educate and produce a class of human beings united by understanding, acceptance, and empathy.”

SOURCE: Based on Materials from the website of Jane Elliott, an internationally known teacher, lecturer, diversity trainer.