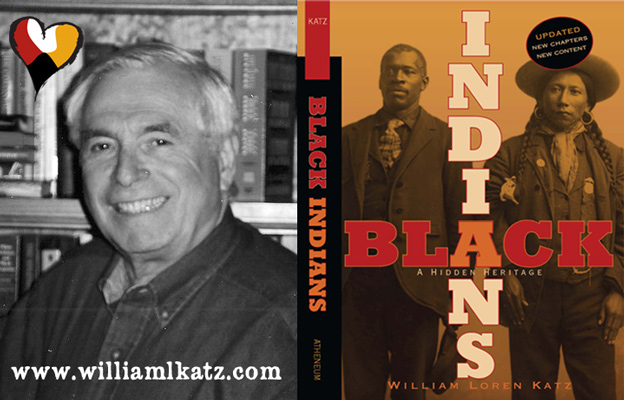 William Loren Katz was the author of an important series of books, including Black Indians: A Hidden Heritage. Forever in our memories.

“Bill Katz is one of the few members outside of our community who has made a significant, lasting contribution to it. Black Legacy is a good, clear layman’s book on African Americans in New York.”

William Loren Katz (Bill): The personal sojourn that led to a book named Black Indians began in the 1930s and his father, Ben Katz, who fell in love with African American blues and jazz music. He first had a large 78-rpm record collection, and then a large collection of African American history books and pictures.

Bill had to be one of the few white kids in the world who went to sleep listening to Bessie Smith, Sidney Bechet, and Louis Armstrong, and woke up surrounded by the writings of Frederick Douglass, W.E.B. Du Bois, and E. Franklin Frazier.

It describes him as one “whose life and work exemplify a sincere desire to promote peace and reconciliation and serve as a bridge between African and Native American people.” The Ministry believed that his books, lectures, and articles promote understanding among people of African and Native-American descent they merit wide recognition.

While the White Dove Peace Award consists solely of a simple certificate, Ms. Belue said, “Mr. Katz was a Peacemaker”; and this honor recognizes his outstanding contributions to harmony among African Americans and Native Americans.

An African American of Cherokee descent, Ms. Belue has often cited “Black Indians” in The Four Winds newsletter, which seeks to promote reconciliation between black and red people. William Loren Katz is an acclaimed lecturer who has spoken at more than 50 universities and dozens of museums and libraries.

“A major contribution, particularly valuable because the subject has been overlooked.”

After graduating from Syracuse University with a BA in history in 1950 and from New York University in 1952 with an MA in Secondary Education, Katz taught social studies in New York City and State secondary schools and served as a curriculum consultant for 14 years.

Since 1967 he has been a lecturer and consultant for Boards of Education from Seattle, Washington to Dade County, Florida, including the Inner London Education Authority and the Education Departments of North Carolina and New York.

“When it comes to digging up the untold stories of black history and culture, Katz is a matchless miner.”

Since 1968, William Loren Katz has been interviewed on Gil Noble’s award-winning television program Like It Is. He has also appeared on NBC’s The Today Show, PBS’s Tony Brown’s Journal and many other major network television programs.

He has hosted his own history interview program on WBAI-FM on Pacifica Radio in New York City and since 1986 has served as the station’s Historian in Residence.

He wass often interviewed on Native American, African American and National Public Radio stations across the country. He has spoken on the much-overlooked alliance that has been shaped by Africans and Indigenous Americans for more than 500 years.

Since 1986 his “Education and Books” column has appeared in the New York Daily Challenge. His essays have also appeared in The New York Times, American Legacy Magazine and Web sites, The Black World Today and Global Black News.

“If you believe people have no history worth mentioning, it’s easy to believe they have no humanity worth defending”

Visit the website of William Loren Katz about his book Black Indians: A Hidden Heritage © Atheneum, 2012 revised edition and more than 40 books.