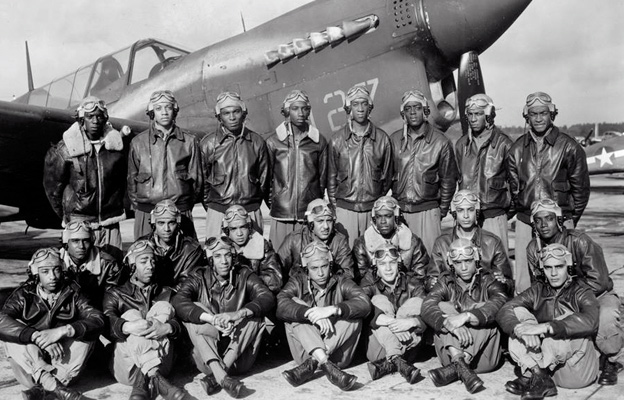 Remembering the “Tuskegee Airmen” during World War II and all who were involved in the so-called “Tuskegee Experiment”, the Army Air Corps program to train Black Americans to fly and maintain combat aircraft.

The Tuskegee Airmen included pilots, navigators, bombardiers, maintenance and support staff, instructors, and all the personnel who kept the planes in the air. The military selected Tuskegee Institute to train pilots because of its commitment to aeronautical training.

Tuskegee had the facilities, and engineering and technical instructors, as well as a climate for year-round flying. The first Civilian Pilot Training Program students completed their instruction in May 1940. The Tuskegee program was then expanded and became the center for Black-American aviation during World War II.

The Tuskegee Airmen overcame segregation and prejudice to become one of the most highly respected fighter groups of World War II. They proved conclusively that Black Americans could fly and maintain sophisticated combat aircraft. The Tuskegee Airmen’s achievements, together with the men and women who supported them, paved the way for full integration of the U.S. military.

All Black Americans who learned to fly in the early 1900s were self-taught or trained overseas. After Charles Lindbergh’s 1927 flight, Black-American interest in flying increased. Aviation clubs and schools were formed.

Tuskegee, Alabama, became the focal point for the training of African-American military pilots during World War II. Tuskegee Institute received a contract from the military and provided primary flight training while the army built a separate, segregated base, Tuskegee Army Air Field (also referred to as the Advanced Flying School) for advanced training. Support personnel was trained at Chanute Field in Illinois.

The Air Corps oversaw training at Tuskegee Institute, providing aircraft, textbooks, flying clothes, parachutes, and mechanic suits while Tuskegee Institute provided full facilities for the aircraft and personnel. Lt. Col. Noel F. Parrish, base commander from 1942-46, worked to lessen the impact of segregation on the cadets. 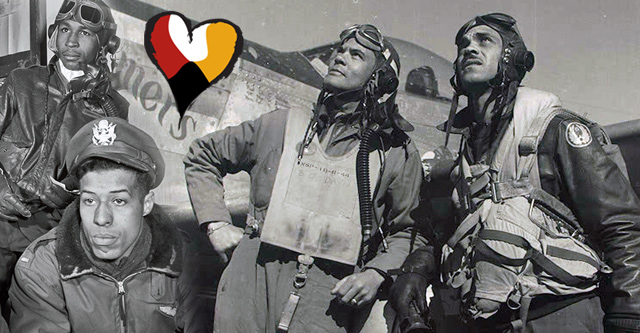 Many cadets got their primary flight instruction at Moton Field, Tuskegee, from Charles A. “Chief” Anderson, The first class of five Black-American aviation cadets earned their silver wings to become the nation’s first black military pilots in March 1942. Between 1941 and 1945, Tuskegee trained over 1,000 black aviators for the war effort.

The 99th Fighter Squadron was sent to North Africa in April 1943 for combat duty. They were joined by the 100th, 301st, and 302nd African-American fighter squadrons. Together these squadrons formed the 332nd fighter group.

The transition from training to actual combat wasn’t always smooth given the racial tensions of the time. However, the Airmen overcame the obstacles posed by segregation. Under the able command of Col. Benjamin O. Davis, Jr., the well-trained and highly motivated 332nd flew successful missions over Sicily, the Mediterranean, and North Africa.

Bomber crews named the Tuskegee Airmen “Red-Tail Angels” after the red tail markings on their aircraft. Also known as “Black” or “Lonely Eagles,” the German Luftwaffe called them “Black Bird Men.” The Tuskegee Airmen flew in the Mediterranean theater of operations.

They never lost a bomber to enemy fighters. A Distinguished Unit Citation was awarded to the 332nd Fighter Group for “outstanding performance and extraordinary heroism” in 1945.

Their achievements proved conclusively that the Tuskegee Airmen were highly disciplined and capable fighters. They earned the respect of fellow bomber crews and of military leaders. Having fought America’s enemies abroad, the Tuskegee Airmen returned to America to join the struggle to win equality at home.

On November 6, 1998, President Clinton approved Public Law 105-355, which established the Tuskegee Airmen National Historic Site at Moton Field in Tuskegee, Alabama, to commemorate and interpret the heroic actions of the Tuskegee Airmen during World War II. 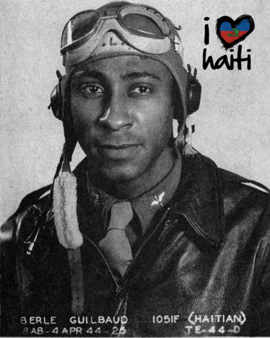 Did you know that there were Haitians recruited to fight in World War II for the United States? In the early 1940s, an ad appeared in a Haitian newspaper recruiting 40 pilots for training at the Tuskegee Institute in Alabama. We know for sure that at least 6 pilots went for training at the Tuskegee Institute, and most of them were in the Haitian Army or Airforce. And we know their names:

The first three men (Raymond Cassagnol, Alix Pasquet, and Philippe Célestin) left Port-au-Prince in February of 1943 for Alabama (Via Puerto Rico, via Miami via Jacksonville), and had to ride in a Blacks-Only transportation or had to sit in the back of trains, as blatant segregation was in full swing in those days, something they were totally unaccustomed to in Haiti.

Cassagnol would later write in his autobiography “Mémoires d’un Révolutionaire” that he avoided going off the Tuskegee Army Training Field and off the campus, because he couldn’t stand to be made to feel inferior, and the humiliation that came with it.

It was an exciting time for the three. The Afro American, one of the most popular and widely circulated black newspapers of the time, even had a feature story on the men in its April 10, 1943 issue. In it, it was revealed that Pasquet and Célestin were graduates of their native land’s Ecole Militaire D’Haiti, and were already officers, while Cassagnol had worked as a mechanic for the Haitian Airforce.

SOURCE: Compiled By I Love Ancestry based on materials from NPS.gov and Kreyolicious.com.