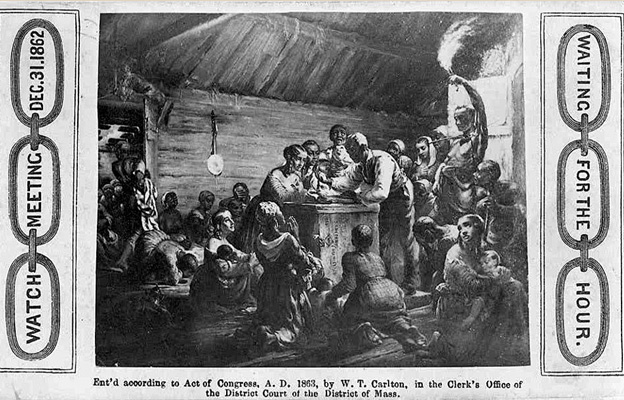 While Watch Night Service and the Emancipation Proclamation relate to Black liberation history, let us also acknowledge a real fact: Abraham Lincoln was no saint toward people of color…

The roots of Watch Night Service (December 31, 1862,) celebrated in many African American communities, especially in the Black Church nationwide are founded in enslaved African and liberation history. That New Year was ushered in by enslaved Africans waiting and praying for news that President Abraham Lincoln’s Emancipation Proclamation had become law.

Rev. Joan R. Harrell wrote the following in his contributing article for HuffPost.com:

“Watch Night Service” in the Black Church in America symbolizes the historical fact, that on the night of Dec. 31, 1862 during the Civil War, free and freed blacks living in the Union States gathered at churches and/or other safe spaces, while thousands of their enslaved black sisters and brothers stood, knelt and prayed on plantations and other slave holding sites in America — waiting for President Abraham Lincoln to sign the Emancipation Proclamation into law.

On January 1, 1863, as the nation entered its third year of civil war, President Abraham Lincoln issued the Emancipation Proclamation, declaring “that all persons held as slaves” within the rebellious states “are, and henceforward shall be free.”

At the time more than three million Black Americans in the U.S. were in bondage, primarily in the south.

It is important to mention a travesty of justice by which President Abraham Lincoln ordered the largest mass hanging execution in US history of 38 + 2 Indigenous Dakotas at Mankato, Minnesota, six days earlier, the day right after Christmas, December 26, 1862.

A Transcription by the President of the United States of America:

Whereas, on the twenty-second day of September, in the year of our Lord one thousand eight hundred and sixty-two, a proclamation was issued by the President of the United States, containing, among other things, the following, to wit:

“That on the first day of January, in the year of our Lord one thousand eight hundred and sixty-three, all persons held as slaves within any State or designated part of a State, the people whereof shall then be in rebellion against the United States, shall be then, thenceforward, and forever free; and the Executive Government of the United States, including the military and naval authority thereof, will recognize and maintain the freedom of such persons, and will do no act or acts to repress such persons, or any of them, in any efforts they may make for their actual freedom.

Arkansas, Texas, Louisiana, (except the Parishes of St. Bernard, Plaquemines, Jefferson, St. John, St. Charles, St. James Ascension, Assumption, Terrebonne, Lafourche, St. Mary, St. Martin, and Orleans, including the City of New Orleans) Mississippi, Alabama, Florida, Georgia, South Carolina, North Carolina, and Virginia, (except the forty-eight counties designated as West Virginia, and also the counties of Berkley, Accomac, Northampton, Elizabeth City, York, Princess Ann, and Norfolk, including the cities of Norfolk and Portsmouth[)], and which excepted parts, are for the present, left precisely as if this proclamation were not issued.

And by virtue of the power, and for the purpose aforesaid, I do order and declare that all persons held as slaves within said designated States, and parts of States, are, and henceforward shall be free; and that the Executive government of the United States, including the military and naval authorities thereof, will recognize and maintain the freedom of said persons.

And I hereby enjoin upon the people so declared to be free to abstain from all violence, unless in necessary self-defense; and I recommend to them that, in all cases when allowed, they labor faithfully for reasonable wages.

And I further declare and make known, that such persons of suitable condition, will be received into the armed service of the United States to garrison forts, positions, stations, and other places, and to man vessels of all sorts in said service.

And upon this act, sincerely believed to be an act of justice, warranted by the Constitution, upon military necessity, I invoke the considerate judgment of mankind, and the gracious favor of Almighty God.

In witness whereof, I have hereunto set my hand and caused the seal of the United States to be affixed.

Done at the City of Washington, this first day of January, in the year of our Lord one thousand eight hundred and sixty three, and of the Independence of the United States of America the eighty-seventh.

By the President: ABRAHAM LINCOLN

To this day, many religious and non-religious Black Americans continue the faith tradition of their enslaved ancestors and gather at a designated meeting space, most often than not at their local church to celebrate the survival of a people who were defined in the U.S. Constitution as three-fifths human, shackled in chains and denied the right to vote.

It is a tradition in the Black Church in America that five minutes before midnight, men, women, and children will kneel, hold hands and pray to God from the present year into the New Year.

What about you? Have you ever learned of the historical significance of Watch Night Service at the Black Church accross America ?

SOURCE: Based on materials from archives.gov and smithsonianmag.com by Joann Stevens