YoNasDa, pronounced Yo-Naja-Ha, meaning “Precious Jewel”, is an enrolled member of the Oglala Lakota Nation. “No Nation Can Rise Higher Than Its Woman,” is a saying that breathes truth for Queen YoNasDa as she epitomizes this energy.

YoNasDa, as an Afro Native American woman is committed to continuing the work of her mother Wauneta Lone Wolf-Cox (1951 – 2003).

“It is an honor to have two rich heritages running through my veins, but at times it was hard as well. Because I am brown skinned (not looking like the stereotypical mixed person) I was constantly in defense of American Indians in school, when the children didn’t think I was Native American, and they would poke fun of us during Thanksgiving by calling us “red skins,” “Indian givers,” and making “hey ya ya” sounds. The same way I felt as a child by standing up for who I am, I am the same way today.” 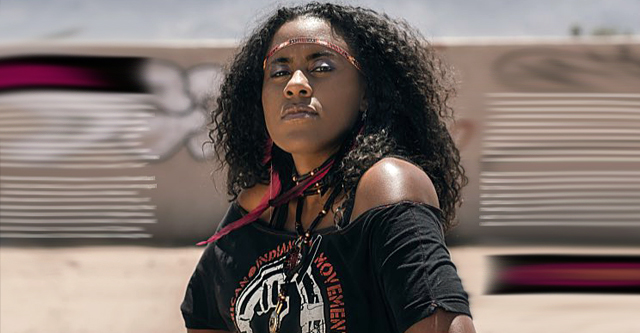 Yonasda’s mother was an Oglala Lakota social activist, youth counselor and motivational speaker who also was part of the American Indian Movement (AIM).

Yonasda’s mother also worked with Muhammad Ali, the Nation of Islam as well as with the Honorable Minister Louis Farrakhan to bring closer relations between Black American and Indigenous communities. Her father was the fine artist Theadius McCall, a Black American from Brooklyn, NY.

Her grandfather is the world-renowned Minister Louis Farrakhan. As a young child, YoNasDa stood by her mother’s and grandfather’s side speaking to the hip hop nation.

She often remembers when her grandfather said that one rapper’s song is equivalent to five of his speeches. YoNasDa feels very strongly about her responsibility to use her music as a mouthpiece to educate and uplift young people.

“December 21, 2003 is the day my mother, Wauneta Lonewolf, passed of lung cancer. She worked strenuously on bridging cultural awareness, Native American philosophies and education to races of all kinds. She was full blood Oglala Lakota and my father, Theadius McCall, was African American. Growing up, as a single mother, my mother did her best to raise my brother N’gozi Wazi (Julio), and me to make sure we knew our Native and African American history. Just imagine, at the age of 10 learning the story of the Trail of Tears and the Trans-Atlantic Slave Trade at the same time, and people thought seeing Roots was horrific. I had double punches of battery of the struggles of my people.” 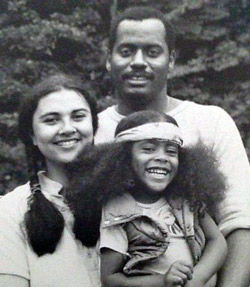 YoNasDa started in 2011 “Rez Tours” which offers cultural tours to Indigenous communities across North America to learn more about Indigenous cultures. Rez Tours is an important project to educate people from all walks of life about Native people and their communities.

This is a truly inspiring project that YoNasDa has made available for organizations, community leaders, entertainers and the general public at large to enjoy a unique experience of the rich culture, food, history and traditions of Indigenous Americans.

This video is the story of YoNasDa’s journey In 2012 back to the tribe of her mother and her ancestors to unite two great nations. YoNasDa Lonewolf led a delegation of mental health workers, economic development specialists and hip hop artists to visit and bring awareness on the plight of poverty affecting the Oglala Lakota Nation of the Pine Ridge Indian Reservation in South Dakota. YoNasDa also had the opportunity to meet with leaders from the Oglala Lakota Nation.

Queen YoNasDa is the estranged wife of Wu-Tang Clan’s Cappadonna and a mother of two sons.  To YoNasDa “Queen” is not just a word, it is a calling and she’s rising to the occasion.

As an Afro Native American mother, she sees what music can do and understands the power of the spoken word. YoNasDa has a mission and is going full throttle. You can catch the Queen speaking to college students around the country. This truth-teller is a published writer who has a weekly column in the Final Call Newspaper. 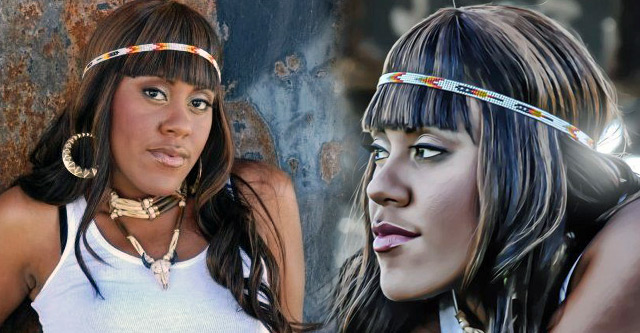 The Queen has driven herself in the industry beginning choreographing for BET’s own Teen Summit, Planet Groove and Soundstage to opening nationally on the Wu-Tang Clan 8 Diagrams Tour (Winter 2008-2009).

Along the way, she has performed with many other artists from Lloyd, Ginuwine, Method Man & Redman, Jurassic 5, Christina Aguilera & Many more. “I’m not here to beat people in the head with a sermon, I’m here, to tell the truth,” she eludes.

As an Afro Native American woman, YoNasDa speaks across Turtle Island, known as the United States promoting unity, education, and respect for all cultures. With roots reaching back to Indigenous American tradition where her mother, an Oglala Lakota and her father, a fine Black American artist hailing from Brooklyn, YoNasDa knows the blues all too well, but never let it dampen her spirits.