Penny Gamble-Williams of Wampanoag and African heritage is an artist and spiritual leader involved in Native land, freedom of religion and sacred site issues, Indigenous and environmental rights.

“Remember to use the gifts that the Great Spirit has blessed us with. Let’s create ways to uplift all people. We can do it through visual arts, crafts, writing, poetry, music, movement, activism, laughter, healing, positive vibrations and pure love energy…”

In 1995 she was elected Sachem, (Chief), and served for seven years. Since 2002, Penny has served as Spiritual Leader for The Chappaquiddick Tribe of the Wampanoag Indian Nation of Massachusetts. In 1996, Penny traveled to England to research documents pertaining to the Chappaquiddick Wampanoag.

Penny was born and raised in Providence, Rhode Island. She was exposed to music through her father who was a jazz musician and enjoyed drawing, painting and doing crafts with her mother who was an artist.

Penny was mentored by several renowned artists in Rhode Island and studied at Rhode Island School of Design. Penny moved to Washington, DC in 1972 and attended the Cochran School of Art and Maryland College of Art and Design…

Penny co-founded a storytelling collective called “The Painted Gourd, Red and Black Voices.” In 1992 to express her cultural heritage. The group comprised of four Indigenous people, performed and lectured on the historical connection of Native Americans and Africans before Columbus to the present.

“Speaking Up for the Rights of Indigenous People to Live and Thrive on Ohke, Mother Earth All in the Name of Love! Unapologetic and Unafraid!

We live in a country where many people know nothing about the history of the Original People of this continent and how the United States was formed. We have to raise our voices and tell our stories.

Respecting Ohke, our Mother Earth, the elders, children, and knowing that we must do what ever we can to make things better for the future generations.

Let’s remember the Ancestors who were unable to complete their work. Marching, organizing and finding solutions together will create a stronger foundation for all of us to thrive as we walk in balance on this Earth. Many Nations…..

They presented their program in public schools, libraries, colleges, and government institutions throughout the East Coast. As a cultural presenter, Penny has presented at the University of Maryland, Howard University, Brown University, American University, Georgetown, George Washington University, and George Mason.

Ms. Williams conducts teacher training workshops in public and private schools and works with children of all ages throughout the Washington, DC metropolitan area. She uses storytelling, art, music, and movement to actively engage and involve the children as they learn about the Native and African American historical connections and Afro Native American identity. 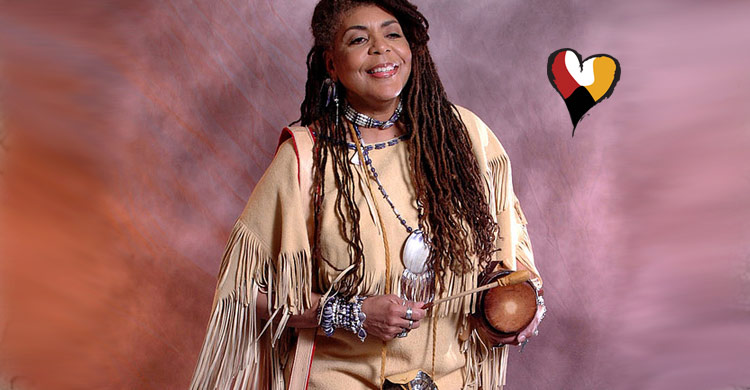 In 2005 Penny and her husband Thunder Williams co-authored a concept paper on the historical connections and relationships of African Americans and presented it to the National Museum of the American Indian.

A traveling exhibit called “Indivisible-African-Native American Lives in the Americas” was created from the concept paper. Penny and her husband were part of the curatorial team. The exhibit about Afro Native Americans opened in November of 2009.

For over thirteen years Penny Gamble-Williams produced and hosted a radio talk show called the “Talking Feather.” The program debuted January 2000 on WOL 1450 AM, a radio station owned by Radio One.

The talk show explored critical issues and concerns dealing with health, environmental matters, history and culture of Native Americans, African Americans and Indigenous People around the world. The “Talking Feather” aired nationally on XM Satellite Radio from October 2001 to March 2004.

Penny has produced other radio programs dealing with Indigenous American women in the arts, and Native American spirituality on WPFW FM Pacifica Radio.

Penny has captured her life experiences which are expressed in several artistic formats. As a mixed media artist, she has exhibited her paintings throughout the East Coast. Penny has written several plays such as Whalin, Environmental Blues and performed a play she co-wrote called Remember the Sweetgrass in New York City at NBC’s PSNBC Showcase Theater.

She worked at the former American Theater and the REP., INC., formally the DC Black Repertory Theater in Washington, DC, where she did sets, lighting, and sound. She studied with the late improvisational actress, playwright, director, and producer Rebecca Rice, and has performed on Maryland Public Television, Museum of Natural History, National Portrait Gallery and radio.

Penny Gamble-Williams is documenting her stories, poetry, and music on CD which will be released soon. Her son, pianist Marc Cary is recording, arranging and producing this project. Visit her website.