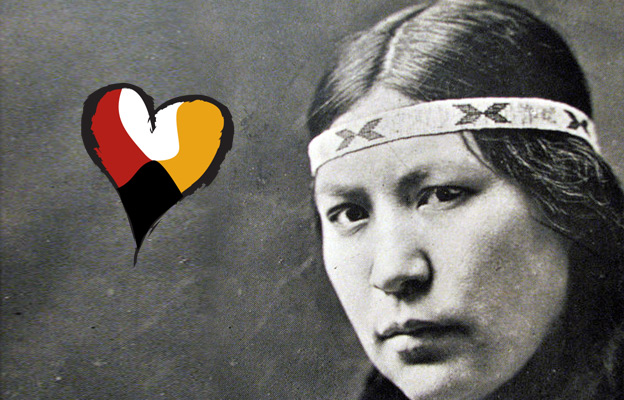 Mourning Dove aka Christine Quintasket was an Okanogan author from the Colville Indian Reservation best known for her 1927 novel that It tells the story of Cogewea, a mixed-blood ranch woman on the Flathead Indian Reservation: “Cogewea the Half-Blood: A Depiction of the Great Montana Cattle Range”

Author Mourning Dove (1888 – August 6, 1936) born in a canoe on the Kootenai River, near Bonner’s Ferry, Idaho, in 1888. The meaning of her indigenous name Hum-ishu-ma was lost to her and she later concluded its English translation as Morning Dove was a contrivance. Women within the Okanogan tribes of Washington State and the Okanagans in southern British Columbia were not traditionally named after birds or animals.

“Everything on the earth has a purpose, every disease an herb to cure it, and every person a mission. This is the indian theory of existence.”

“There are two things I am most grateful for in my life,” Mourning Dove later wrote, “The first is that I was born a descendant of the genuine Americans, the Indians; the second, that my birth happened in the year 1888.

In that year the Indians of my tribe, the Colvile (Swy-ayl-puh), were well into the cycle of history involving their readjustment in living conditions. They were in a pathetic state of turmoil caused by trying to learn how to till the soil for a living, which was being done on a very small and crude scale.

It was no easy matter for members of this aboriginal stock, accustomed to making a different livelihood (by the bow and arrow), to handle the plow and sow seed for food. Yet I was born long enough ago to have known people who lived in the ancient way before everything started to change.”

“We are between two fires, the Red and the White… We are maligned and traduced as no one but we of the despised breeds can know.”

~Mourning Dove, in Cogewea, The Half-Blood

“The Whiteman must have invented the name for it,” she wrote in a letter in 1926. Morning Dove altered the spelling of her pen name to Mourning Dove after visiting a Spokane bird exhibit around 1921 and seeing a mounted bird that was labeled mourning dove. “I have made a sad mistake,” she wrote. “I have misspelt my name. I found out at the museum.”

According to her memoirs, Mourning Dove initially knew herself as Christal Quintasket but this name was incorrectly recorded by the Bureau of Indian Affairs as Christine Quintasket. Mourning Dove used the surname Quintasket because her father Joseph, orphaned at age nine, had apparently accepted the name of an Aboriginal stepfather. Initially, the Quintaskets followed seasonal migration patterns, bringing horses north to Osoyoos Lake each year.

Two members of Mourning Dove’s extended family were important to her in her formative years. From Jimmy Ryan, a 13-year-old white runaway orphan brought home and raised as a son by her father, she learned the alphabet and the pleasures of reading penny-dreadful novels.

“I could spell the word Kentucky before I ever had a primer because it occurred frequently in the novel Jimmy taught me from,” she recalled. From Long Theresa or Teequalt, an elderly woman found wandering in the bush and waiting to die, Mourning Dove received her pubertal training and spiritual guidance (after Teequalt had been persuaded to join their family).

Teequalt would later serve Mourning Dove as the model for the second-most important character in her novel.

Mourning Dove recalled, “She was twelve when she first heard of the new people [whites] coming into our country in boats instead of canoes. When my parents went for game or berries, we children took care of her. We prepared meals according to her instructions, then we would sit at her feet and listen to her wonderful stories.”

At age seven, as Christine Quintasket “Mourning Dove” was placed in the Sacred Heart School at the Goodwin Mission in Ward, near Kettle Falls, Washington. There she was cruelly treated by nuns who punished her for speaking only Salishan. 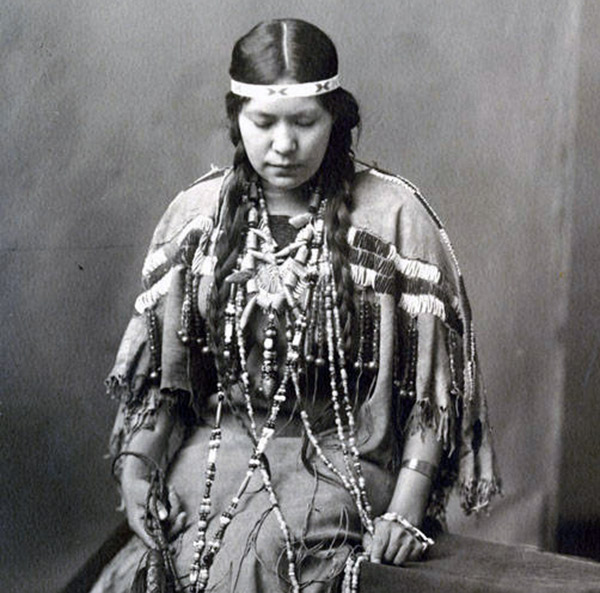 After being sent home, she returned and took her first communion in 1899. “My second stay at the school was less traumatic,” she recalled. “I was anxious to learn more English and read.” When government funding for Aboriginal schools was rescinded, she and her classmates were moved to a school at Fort Spokane.

In 1902, at age 14, she was sent home again, this time to look after her four younger sisters and two younger brothers after her mother died, supposedly as the result of sorcery involving the skewered body of a dried black toad. Two of her sisters died. “I began secretly to read Jimmy’s books,” she recalled.

“My parents scolded and rebuked me many times because they thought reading was an excuse for being idle.” Upon her father’s remarriage, Mourning Dove was sent to another school for Aboriginals in Great Falls, Montana where she witnessed the last roundup of the buffalo herd in 1908.

There she married Hector McLeod, a Flathead who mostly proved himself to be an abusive husband. Having had his arm shot off by a bootlegger, Hector McLeod was later shot to death during a card game in Shurz, Nevada in 1937.

In her late teens, Mourning Dove went to live with her maternal grandmother of the Okanogan tribe, mainly situated today in the western part of the Colville Reservation, near the Columbia and Okanogan Rivers and the Canadian border.

From this grandmother, she learned the power of Okanogan storytelling but Mourning Dove’s exposure to western pulp novels equally influenced her own approach to writing fiction. In particular, she was motivated by a 1909 novel by Theresa Broderick entitled The Brand: A Tale of the Flathead Reservation.

By 1912 Mourning Dove was living in Portland and writing her novel, frustrated by her difficulties with English. Eager for advancement, she enrolled herself in typing and writing courses at a business college in Calgary, Alberta between 1913 and 1915. Thereafter she taught school at the Inkameep Indian Reserve at Oliver, B.C. where she saved enough of her salary to buy herself a typewriter.

An ethnologist who was adopted into the Yakima tribe after his vigorous defense of their irrigation rights, McWhorter was a sincere student of Aboriginal cultures who had received the honorary name He-mene Ka-wan, meaning “Old Wolf.”

Also the founder of American Archaeologist, McWhorter had moved to a Washington State homestead from his native West Virginia in 1903. A mutual friend named J.W. Langdon advised Mourning Dove to pursue McWhorter’s collaboration. While she re-worked her novel-in-progress and he added his own didactic passages to it, McWhorter encouraged her to gather more stories from the Okanogans.

By 1916 Mourning Dove was eagerly anticipating the publication of her novel. It was to be entitled Cogewea but ultimately it was spelled Co-ge-we-a on its title page. Publication, as arranged by McWhorter, was long-delayed, partially due to World War I.

Mourning Dove became an advisor to local chiefs until she married Fred Galler, a Wenatchee, in 1919. Although this marriage was more successful than her first, her subsequent domestic life as an itinerant fruit and vegetable picker proved extremely difficult.

Childless, she lugged her typewriter with her, camping out in hop fields and apple orchards exhausted much of the time. Mourning Dove had to wait 15 years after meeting McWhorter before her long-in-progress novel Cogewea, The Half-Blood: A Depiction of the Great Montana Cattle Range was finally published. The title and subtitle are misleading.

Although it included her recollection of the final buffalo roundup, the novel mainly concerns three sisters. Mary is traditional, Julia has assimilated into white culture and the half-blood Cogewea seeks a compromise between two cultures.

Despite some recognition that arose with the release of Cogewea, Mourning Dove’s life remained harsh. Her status as an Aboriginal author and her ownership of a Ford jalopy didn’t prevent her from suffering pneumonia, rheumatism and other illnesses that arose from exhaustion.

Increasingly active in Aboriginal politics, she gave public talks, started social organizations such as the Colville Indian Association, and secured monies owed to the tribe, but the only formal recognition she received for her writing was an honorary membership in the Eastern Washington State Historical Society.

Again with McWhorter’s assistance, Mourning Dove’s Coyote Stories (1933) appeared with credit for editing and illustrations accorded to Heister Dean Guie. Neither McWhorter nor Heister Dean Guie fully trusted Mourning Dove as an authority on Okanogan culture but she was allowed to provide an introduction that placed her work in an Okanogan context.

A foreword by Chief Standing Bear was added by her editors because he was having contemporaneous success with his own books about the Sioux. Coyote Stories contains stories such as “The Spirit Chief Names the Animal People” about the coyote tradition and the concept of power emanating from the Sweat House ritual.

McWhorter would indirectly play a role in the publication of Mourning Dove’s only other book, Mourning Dove: A Salishan Autobiography, (1990), edited by Jay Miller, after her manuscript for the memoir was discovered by McWhorter’s widow almost a half-century after her death.

In July of 1936, Mourning Dove was taken to the state hospital at Medical Lake in Washington State where she died after one week at age 48. The death certificate stated the cause of death was exhaustion from manic depression. For decades her gravestone in Okanogan, Washington said only “Mrs. Fred Galler.” It now reads, “Mourning Dove / Colville Author / 1884-1936.”

SOURCE: Based on material compiled from “Cogewea, The Half-Blood” by Christine Quinstaket (Mourning Dove) and RootsWeb