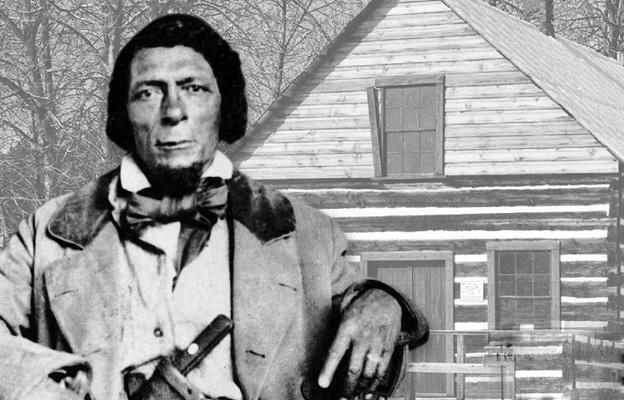 James “Jim” Beckwourth (Apr. 6, 1798 – Oct. 29, 1866) emerged from the fur trade’s early history as “the greatest Indian fighter of his generation.” This was an age when his competitors were Daniel Boone, Davy Crockett, Jim Bridger, and Kit Carson. In skill, accomplishment, and violence, he matched these men whose deeds have become part of a “glorious frontier heritage.”

But when Universal-International in Hollywood produced the horse opera Tomahawk in 1951, it cast white actor Jack Oakie as Jim Beckwourth. Generations of young people never learned that this tough pioneer fur trapper was an African American with Native American ancestry.

Beckwourth was born around 1798 to a black slave with Native American lineage and her white master. As a teenager, he was apprenticed to a St. Louis blacksmith. His adventures began at 19 when he fled to the frontier, Beckwourth swept from one end of the continent to the other, from California to Florida, from New Orleans to Nevada.

In a Crow village, he was adopted into the nation and married the chief’s daughter. First named “Morning Star,” after leading Crows into battle, he was renamed “Bloody Arm.” Later Beckwourth prospected for gold, trapped, and wandered.

By then he carried such Indian names as Bull’s Robe, Medicine Calf, and White-Handled Knife. When he became a Crow chief, he led his men into battle stripped down and shouting, “I will show you how to fight.”

In April 1850, Beckwourth made a discovery that should have forever earned him a place in history books. Northwest of what is now Reno, Nevada, and on what is now Route 70 in California, he found a pass through the Sierra Nevada mountains.

It soon became an important gateway to California. Today the pass, mountain peak, and town nearby still bear Beckwourth’s name. He personally led the first wagon train through Beckwourth Pass. Later he built a hotel and retired to become a peaceful innkeeper. In 1866 Beckwourth died of food poisoning while traveling to or from a Crow village.

This simple fact has given rise to a legend: He was invited back to his Crow people by those who hoped he would consent to lead them again. When Beckwourth refused, this legend continues, he was given a feast and poisoned.

Unable to have him as a live chief, Crows would keep him forever in their burial grounds. This fantasy touches truth in the admiration his fellow Crows had for him, and in their profound sense of loss when he left them.

Beckwourth was part of that frontier tradition that opened the wilderness to exploration and settlement. “Probably no man ever lived who has met with more personal adventure including danger to life,” wrote his biographer, T. D. Bonner.

← Lucy Gonzales Parsons: A Woman For All Seasons Paul Robeson, an American trailblazer ahead of his time →