Paul Robeson, an American trailblazer ahead of his time 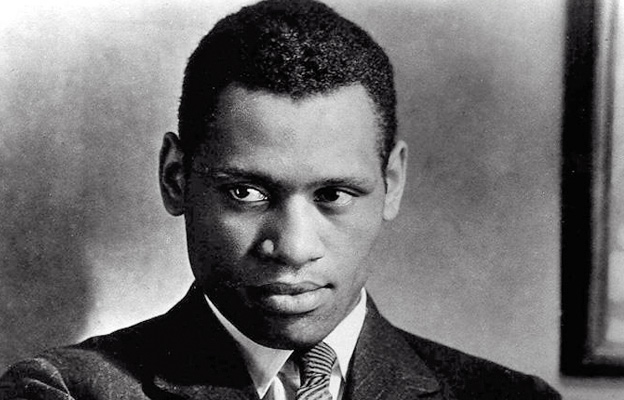 Paul Robeson (Apr. 9, 1898 – Jan. 23, 1976), was born to a family steeped in resistance. His father had escaped from slavery. Young Paul Robeson grew to be a majestic figure in the United States, beginning at Rutgers as an all-star athlete, then a singer and actor, and finally as an activist devoted to fighting racism here, colonialism in Africa, and fascism and imperialism all over the world.

In a kinder, more intelligent country Paul Robeson would have been the Secretary of State, a Supreme Court Justice (he had a law degree from Columbia University) or President of the United States. Though celebrations all over the country honor the memory of this intellectual and moral giant, his name is virtually unknown to high school and college students.

This represents a loss of one of the most significant figures and role models for today’s young people. In 1938 Robeson traveled to Madrid, Spain to sing to the volunteers of the International Brigades fighting Hitler and Mussolini’s march through Europe. Insisting the artist had to stand for freedom or slavery, he said, “I had no choice.”

Robeson was both intensely proud of his African ancestry, and the first citizen to embody all of multicultural America. He learned dozens of languages so he could sing songs celebrating resistance to tyranny As “America” he sang the “Ballad for Americans” during World War II.

For most of our century, Robeson told us the time of day. Paul Robeson was one of the first people outside of my family I came to love, and one of the first whose safety I feared for. In 1943 I was a high school student when I first saw him in “Othello” with Uta Hagan and Jose Ferrar, and can never forget his presence.

Around 1947 my father took me to hear him speak in New York City and his voice enveloped me and the audience. I never heard anything like it before or since. What Robeson tried to do and did accomplish is extraordinary when viewed against the obstacles of his times.

From before he was born until he was in his fifties the U.S. Supreme Court ruled that apartheid was the law of the land. In the 1890s white mobs took the lives of three or four black men, women, and children, each week, often by fire. Black Representation in the U.S. Congress had dwindled to one.

The one Black Congressman, Thomas E. Miller, told his fellow Congressmen what his people in the south wanted:

When Paul was born there was no NAACP, no Urban League, and no President willing to condemn lynching. He was a toddler in 1900 when American racism and imperialism embraced as the United States gained an empire of dark-skinned people that stretched from Puerto Rico in the Atlantic to the Philippines in the Pacific.

In the Philippines, U.S. officers used the “N-word” to describe the freedom-fighting Filipinos they tortured and killed. South Carolina Senator “Pitchfork” Ben Tillman scoffed at the North’s hypocrisy:

No [Northern] leader will now dare to wave the bloody shirt and preach a crusade against the South’s treatment of the Negro. The north has a bloody shirt of its own. Many thousands of them have been made into shrouds for murdered Filipinos, done to death because they were fighting for liberty.

No Black person sat in the U.S. Congress from the time Robeson was three until he was over thirty. U.S. Presidents trumpeted their racism. President Theodore Roosevelt favored a “race war” and called Black people “altogether inferior to whites.” President Taft told black college graduates in North Carolina “Your race is meant to be a race of farmers, first, last and always.” Democratic presidential candidate William Jennings Bryan said:

“Anyone will look at the subject without prejudice will know that white supremacy promotes the highest welfare of both races.”

President Woodrow Wilson told a Black delegation: “Segregation is not humiliating but a benefit and out to be so regarded by you gentlemen.” Presidents Harding and Coolidge were Klan members. Asked in 1940 to support an anti-lynching bill, Franklin Roosevelt told an NAACP official, “I just can’t take that chance.”

The views Robeson projected in defense of Black people at home and in Africa soon placed him in the crosshairs of J. Edgar Hoover’s primitive racism and warped agendas. Hoover’s worst nightmare, Robeson was a charismatic, revolutionary Black figure who could not be turned around.

FBI agents read his mail, tapped his phones, and attended his parties. But Robeson had become among the best-loved Americans in the world and every time he sang spirituals or spoke he fought racism.

His music also celebrated the 1943 Warsaw Ghetto uprising against Hitler’s army, Irish patriot Kevin Barry and Joe Hill, a Swedish immigrant, and union organizer who was framed for murder and executed by a Utah firing squad.

As Robeson continued to talk of peace during the Cold War, he was accused of disloyalty. People attending a Robeson concert in Peekskill, New York were attacked by a mob shouting “Kikes” and the N-word as state police looked on or took part.

Robeson was protected by white and Black union members and escaped unharmed. New York Governor Thomas Dewey never apologized to the victims or compensated them. As the FBI dogged Robeson’s trail after the war the CIA hired 10,000 Nazis as experts on Communism, and settled them on tree-lined suburban streets.

“Could I say that the reason that I am here today, you know, from the mouth of the State Department itself, is: I should not be allowed to travel because I have struggled for years for the independence of the colonial peoples of Africa.”

His income fell from six figures to six thousand dollars a year, and his passport was taken away. But Robeson remained gracious, renewed his principles, and became more determined to fight.

Robeson renewed himself when he walked the streets of Harlem or Black neighborhoods in Detroit. People rushed out to say “Paul, we love you.” Here was a celebrity who threw himself into the hazardous struggle against oppression and used his talents to fuel our latent power and help us mobilize against injustice.

These remarks were written for the 100th anniversary of Paul Robeson’s birth celebrated at a public meeting held at Columbia University in 1998.