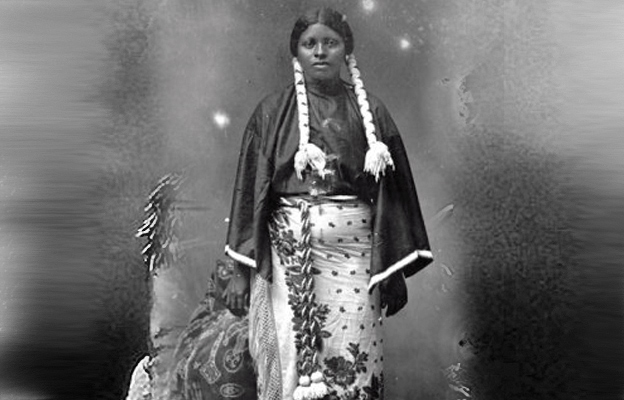 Diana Fletcher (1838 – ?) is thought to be the daughter of an enslaved African who ran away to seek freedom in Florida, and a Seminole woman who died on “The Trail of Tears,” the forced relocation of American Indians to Oklahoma.

It is said that she was separated from her father, once in Oklahoma, then adopted and raised by a Kiowa family. Diana learned traditional Kiowa crafts from her step-mother.

When the members of the tribe raised enough money, they built a small school and hired a teacher. The Black Indian schools were operated by what was known as The Five Civilized Tribes: the Creek, Chickasaw, Cherokee, Choctaw, and Seminole.

Some sources say Diana Fletcher taught fellow American Indians. Diana’s main accomplishment was valuing and preserving her family’s history, culture and values, while, at the same time, learning to adjust and adapt to white American society.

Because of ignorance, prejudice, and racial hostility, the U.S. government attempted to force American Indians with African heritage, as well as all American Indians, to reject their heritage.

Because people like Diana Fletcher maintained their traditions, we can now learn about their important contributions to the history of America. The Hampton government boarding school was opened for Black students in 1868, with the intent of educating by training “the head, the hand, and the heart” so pupils could return to their communities as leaders and professionals among their people.

In 1878, the institute opened its doors to American Indians. The following year, in a grand experiment led by Capt. Richard Henry Pratt, the Carlisle Indian Industrial School in Carlisle, Pennsylvania, was opened as a way to assimilate Indians into “civilized” society, although without the intent of returning graduates to their communities.