Travesty of Justice: The Murder of Virgil Lamar Ware (1963) 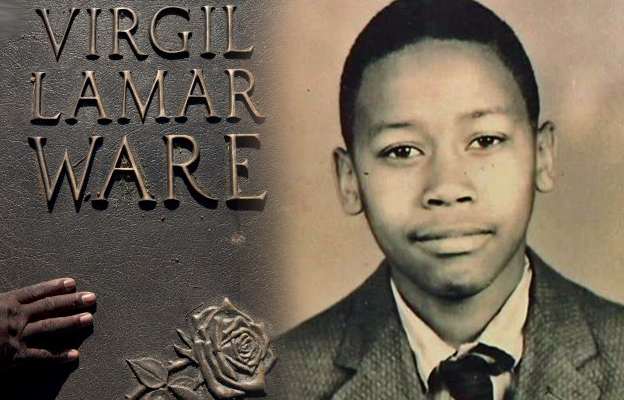 In the tense atmosphere that followed a deadly church bombing in Birmingham, Alabama, on September 15, 1963, Thirteen-year-old Virgil Lamar Ware was murdered by two white teenagers without justice served.

Virgil Lamar Ware (Dec. 6, 1949 – Sept. 15, 1963) was an eighth-grader, an A student and a football player who dreamed of becoming a lawyer on the day he was gunned down in the aftermath of the Birmingham church bombing.

Virgil Lamar Ware and his brother James were returning home from a shopping trip, unaware that the bombing had occurred when they encountered Larry Joe Sims and Michael Lee Farley. Sims and Farley, both 16, were riding along on their motorcycle coming from a segregationist rally. Farley gave Sims his handgun to admire. When the white teenagers saw the Ware brothers, Farley told Sims to shoot, to “scare them.” Sims shot Virgil twice, once in the cheek and once in the chest. The 13-year-old Ware died on the Docena-Sandusky Road on the outskirts of Birmingham.

Sims was charged with first-degree murder and convicted by an all-white jury of second-degree manslaughter. Farley pled guilty to the same charge. Both were sentenced to seven months in jail, but the judge who presided over the cases suspended their sentences, substituting two years’ probation.

On May 6, 2004 Ware’s remains were disinterred from an unmarked roadside grave and moved to a different burial place with a bronze marker. That same day, 16-year-old Johnny Robinson Jr. was murdered by police.

SOURCE: Based on materials from Northeastern University School of Law, Biography.com