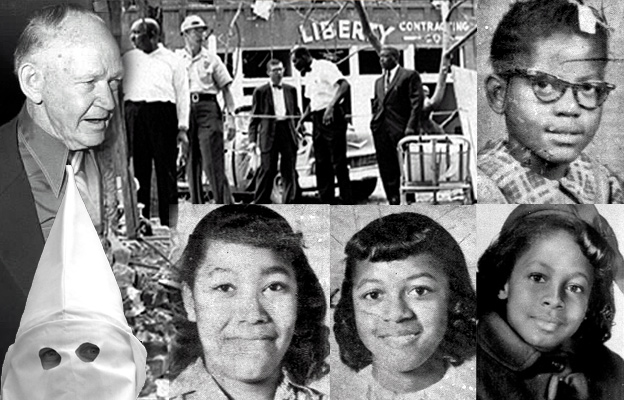 This church bombing was an unforgettable act of American Terrorism by white supremacist members of the Ku Klux Klan, “The Law in Disguise” for the 16th street Baptist Church Bombing in Birmingham, Alabama, September 15, 1963.

“We must be concerned not merely about who murdered them, but about the system, the way of life, the philosophy which produced the murderers.”

The hateful and tragic event marked a turning point in the U.S. 1960s Civil Rights Movement and contributed to support for passage of the Civil Rights Act of 1964.

“I was 9 years old in 1963, a white kid living out in suburbia, and so my life was a very segregated life, a sheltered life. I don’t have any recollections of that day…Birmingham was two towns—a black town and a white town. It took me getting into junior high to see things changing. My elementary school was all white, but when I went to the seventh grade I for the first time went to a school that was integrated, and the kids started adapting, trying to work together.”

A witness identified Robert Edward Chambliss, a member of the Ku Klux Klan, as the man who placed the bomb under the steps of the Sixteenth Street Baptist Church. He was arrested but only charged with possessing a box of 122 sticks of dynamite without a permit.

On October 8, 1963, Chambliss received a hundred-dollar fine and a six-month jail sentence for having the dynamite. At the time, no federal charges were filed on Chambliss.

The case was unsolved until Bill Baxley was elected Attorney General of Alabama (1971). He requested the original Federal Bureau of Investigation files on the case and discovered that the FBI had accumulated evidence against the named suspects that had not been revealed to the prosecutors by order of J. Edgar Hoover. The files were used to reopen the case in 1971.

In November 1977, the seemingly forgotten case of the Sixteenth Street Baptist Church bombing was brought to Court, where Chambliss, now aged 73, was tried once again and was found guilty and sentenced to life imprisonment. Chambliss died in Lloyd Noland Hospital and Health Center on October 29, 1985.

On May 18, 2000, the FBI announced that the Sixteenth Street Baptist Church bombing had been carried out by the Ku Klux Klan splinter group the Cahaba Boys.

It was claimed that four men, the afore-mentioned Robert Edward Chambliss, Herman Frank Cash, Thomas Edwin Blanton, Jr. and Bobby Frank Cherry had been responsible for the crime. Cash was already deceased but Blanton was convicted in 2001, and Cherry was convicted in 2002 of murder and sentenced to life in prison. Never forget this church bombing by the Ku Klux Klan that killed innocent children.

SOURCE: Written and compiled based on materials from Wikipedia, License CC BY-SA 3.0