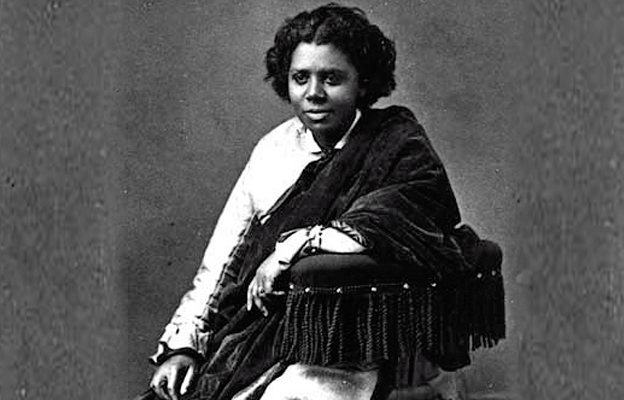 Edmonia Lewis (July 4, 1844–September 17, 1907) is the first credited Afro Native American female sculptor in the U.S. Lewis who gained fame and recognition as a sculptor in the international fine arts world. Lewis was inspired by the lives of abolitionists and Civil War heroes.

Her father was Haitian of African descent, while her mother was of Mississauga Ojibwe and African descent. Lewis’s mother was known as an excellent weaver and craftswoman. Lewis was nicknamed “wildfire” by her mother’s Native community, the Ojibwe. Her family background inspired Lewis in her later work.

Mary E. Lewis fell on hard criticism and was accused of several crimes at Oberlin, including the theft of paintbrushes by her art teacher, and even the murder of two female students. The girls apparently drank bad wine that was served by Lewis. Although she was not convicted of either crime, the school revoked her chances of graduation.

In 1863, Edmonia Lewis found friendship with abolitionist William Lloyd Garrison. Through Garrison, she was introduced to Edward Brackett who mentored her in her craft. She would become one of the most famed artists in Boston.

Her first creations were medallions with portraits of white anti-slavery leaders and heroes of the Civil War. The replicas from her 1865 bust of Black battalion leader, Robert Gould Shaw, earned her enough money to travel abroad and study in Rome. The bust is now owned by the Museum of Afro-American History in Boston. 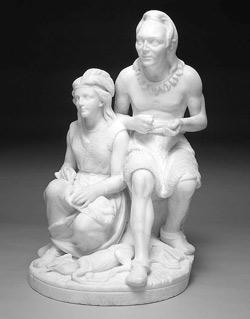 Using inspiration from the Emancipation Proclamation, Edmonia Lewis would make her masterpiece and best-known sculpture called “Forever Free” in 1867. Then ten years later, the art world would praise her piece called “The Death of Cleopatra,” because it showed a strong, powerful Cleopatra after death, unlike other artists who made her look weak. The piece is held by the National Museum of American Art in Washington, D.C.

As an artist at war, Lewis was a rare instrument for social change in the aftermath of the Civil War. Emerging in “the Athens of America,” then heading for Rome, she pressed her case for equality with help from the Republican press. Among her greatest achievements, she became the only artist of color invited to exhibit at the 1876 Centennial. She created a sensation, regularly appearing in person with her marble “Death of Cleopatra” and several other works while most artists left their work unattended.

Mary Edmonia Lewis lived in France, passed away in London, UK where she’s believed to have lived for some time after France.

“My mother was a wild Indian, and was born in Albany, of copper colour, and with straight, black hair. There she made and sold moccasins. My father, who was a negro, and a gentleman’s servant, saw her and married her.”

SOURCE: Compiled from BlackAmericaWeb.com, and EdmoniaLewis.com